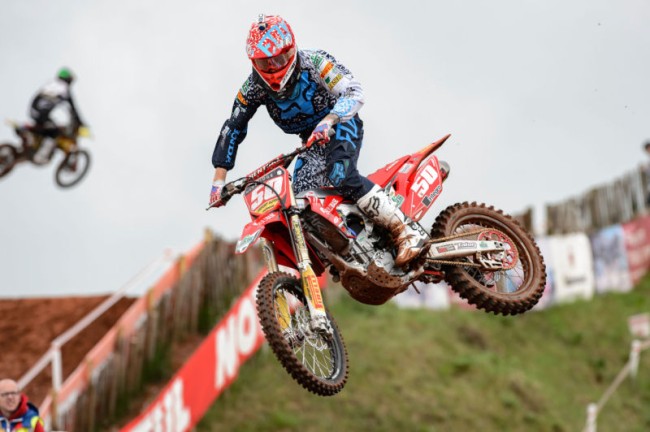 Liam Knight took the holeshot but Bryan Mackenzie took the lead on lap one in front of the home crowd and tried to get away from the pack.

But Martin Barr was having none of it and he moved into second and hounded Mackenzie for a few laps before eventually taking the lead and pulling out a 10 second lead to take a comfortable win. Meanwhile Adam Sterry spent most of the race behind Mackenzie before finally making the move with a couple of laps to go.

Liam Knight rode a blinder in fourth as Steven Clarke came from 31st place to get to fifth in a brilliant damage limitation ride for the championship leader.

Jake Nicholls took the holeshot with Tommy Searle quickly into second. Shaun Simpson was third and started to catch his title rival Searle. Banks-Browne was fourth with Graeme Irwin putting the pressure on the Yamaha man in fifth.

The front three pulled away from EBB in fourth, and even a crash by Shaun Simpson saw the Scotsman remount in third but the championship leader lost his shot at the win. Graeme Irwin eventually got into fourth and set his sights on Simpson who was trying to get his rhythm back.

Kristian Whatley made his way into fifth at the halfway point after a top ten start only for Krestinov to relegate the former British champion back to sixth.

As Searle pushed hard to get Nicholls with three laps to go, Searle spun out and went down. Searle remounted in second but 7 seconds behind leader Nicholls, but two laps later Searle was amazingly back on the back wheel of the Husky man as they went into the last lap.

Nicholls held on by a crucial half a second to take a heart-stopping win from a determined Searle!

ace one winner Martin Barr got away in seventh and had some work to do to catch the top three – all this title rivals. Barr was into fifth by lap two, got by Todd for fourth and set his sights on championship leader Clarke.

Up front Sterry started to click off some fast lap times to break away from the field and he did just that pulling out an 11 second lead by the halfway point.

Barr put the move on Clarke to go third but Clarke tried to respond as the two rivals battled hard for third position. But Barr was looking forward and was the quickest rider on the track as he caught Mackenzie for second.

Barr stuck it down the inside of Mackenzie to take second but Sterry was cruising up front with a 12 second lead and that would give him the overall victory on the tie-break with Barr.

Brad Todd continued his impressive form with a very good ride in fifth.

It means Clarke leads the championship by seven points from Barr and Mackenzie, with Sterry a further eight points back in fourth.

Tommy Searle took the holeshot but Simpson got into second immediately, passing Irwin, and went for the pass on Searle all on the first lap! Searle shut the door as Nicholls leapt down the inside to pass Irwin for third leaving the three GP riders 1-2-3 with Irwin doing his best to keep their pace.

Lenoir passed EBB for fifth as the Frenchman returned from injury and showed some good speed and started to close in on Irwin.

Searle began to eek out a lead over Simpson, the Englishman determined to beat the Scot on his home turf and close the points in the championship.

Irwin went off the side of the track after a big mistake while under pressure for Lenoir but held onto fourth, as Banks-Browne and Whatley battled it out for sixth.

At the halfway point Nicholls started to close in on Simpson when all of a sudden Searle binned it in the waves and gave the lead to Simpson to the delight of the home crowd!

Searle got back up in second but the top three were tied together and the race was on for the win between the GP trio.

Nicholls then dropped it and lost touch with the front two, costing himself the chance of a double victory.

That left the two title rivals, and not the best of friends, Searle and Simpson duking it out for the moto win and the overall victory.

With three laps to go Searle was just over a second behind Simpson and it was all out for both riders, both on the edge and making mistakes in the rain and ruts at Leuchars. Searle got held up by the backmarkers to give Simpson a bit of a gap with two laps to go.

Simpson then tagged a backmarker and went off the track handing the lead to Searle with just over one lap to go! It was roles reversed with Simson on the back of Searle trying to get the overall victory giving everything he had to get the win on the last lap.

Simpson went for the pass on the outside with half a lap to go but couldn’t make it stick and made a mistake giving Searle the gap he needed to take a hard-earned win and the overall victory.