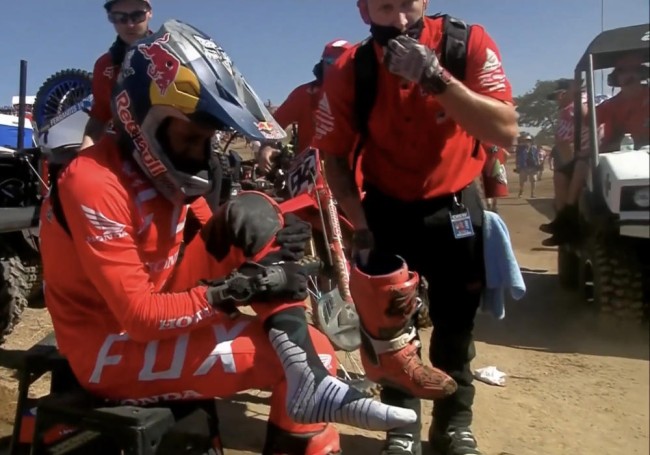 Justin Cooper took the title battle to the last moto of the r with a start to finish win and let the drama happen behind him! Jett Lawrence crashed on lap one then crashed into a fallen ride a lap later and find himself outside the top 20 and a lot of work to do to save his title! The Aussie got his head down and ripped through the field to eighth, including a last lap pass on Cooper’s teammate Frye but the Aussie was helped by Michael Mosiman and Dylan Schwartz coming together while vying for a top three and Austin Forkner earlier DNFing out of third with a mechanical. It all meant a 23 point lead reduced to 11 going into the final moto.

Justin Cooper ( who admitted he broke his thumb in the Washougal crash) won the second moto to take his first 1-1 victory of his career but it wasn’t quite enough to stop Jett Lawrence winning the 2021 250 US National title by just six points even after another crash in race two! Cooper got the jump on Jett but Lawrence was still top ten and working his way through when he hit the back wheel of Vohland and went down. Jett needed to take at least seventh to win the title but eventually ended up third to take his first pro title at just 18 years old in a journey that has taken the family from Australia to Europe and then the US in complete commitment to the sport and chasing their goals. Now, finally, it’s all been worth it!

Jett said: “It feels so great. Oh my gosh, I rode so bad today and Cooper rode awesome, I loved racing him. I gotta thank the whole crew who got me here, my manager, my whole family, my brother and the all of HRC and there are even people in Europe who have helped me get here, I love them all.”

Dylan Ferrandis ran down early race leader Ken Roczen to win the opening moto at Hangtown in style as Eli Tomac crashed while third and chasing down the two Europeans. Tomac would end up fourth behind Cooper Webb. Ferrandis said wrapping up the title last weekend allows him to have fun again on the bike, and he certainly enjoyed that first moto!

The second moto was unexpectedly dramatic with the action beginning in turn one when Ferrandis and Schock collided and Schock then hitting Roczen. Schock and Ferrandis went down, Roczen stayed up but unbelievably it was Roczen with the injury! The German got his foot caught in Schock’s bike and the pain forced Roczen off the track to seek medical attention and carted off to get a scan and the fear of a broken foot/ankle.

It was an unfortunate last moto injury that cost Roczen second overall in the series to Eli Tomac who would win the moto, his last on a Kawasaki and his last with his long-time mechanic who won’t be moving to Star Yamaha with him, with Tomac also revealing he tweaked his thumb in that first moto crash but got it wrapped to go out and win that second moto.

Christian Craig had lead early before Webb took over and then Tomac eventually took the lead as the three Americans plus Max Anstie in fourth ran away from the field to have their own battle up front. At the halfway point it looked like Tomac had the overall but no-one told Dylan Ferrandis who put on a huge charge from last and, with a couple of of laps to go, passed Anstie for fourth then got the critical pass for the overall win, passing teammate Craig for third! Amazingly, Ferrandis didn’t know he was in the overall winning position saying he thought Roczen was out front but just wanted to give it his all before he went on holiday!