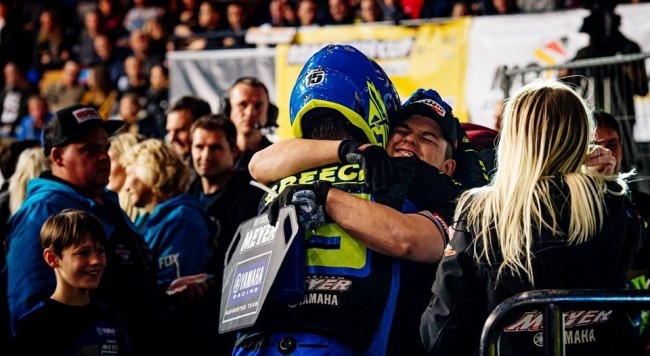 The first night of the ADAC SX Cup in Chemnitz, Germany was won by Ryan Breece. The Meyer Yamaha rider pushed his fellow countryman Tyler Bowers in the final. The Kawasaki rider crashed out which meant Breece won the main.. Boris Maillard came second in the Chemnitz Arena ahead of fellow countryman Charles Lefrancios. In the SX2, American Robbie Wageman won from  fellow countrymen Kevin Moranz and Dare Demartile. The night didn’t go well for Paul Haberland, the leader in the standings was unable to qualify for the final. The same happened to Hakon Frederikson, the Norwegian who had won the first evening in Stuttgart had to watch from the sidelines!

In the 20-lap final, Bowers takes the best start from Maillard and Breece. Maillard managed to hold onto his position for the first five laps, but then Breece managed to make his move. The American trief to connect with the leader, but it didn’t look like he’d succeed. Those laps before the end, the pace of Bowers went down and Breece start to close the gap. Next, he goes the first best opportunity in the attack and with success. Bowers leaves the door open and not only lost the lead but also went down. Because of this he dropped back to the eighth place! Maillard took second place back and held it to the finish. Lefrancios is third despite the fact that he had to place himself through the last chance!