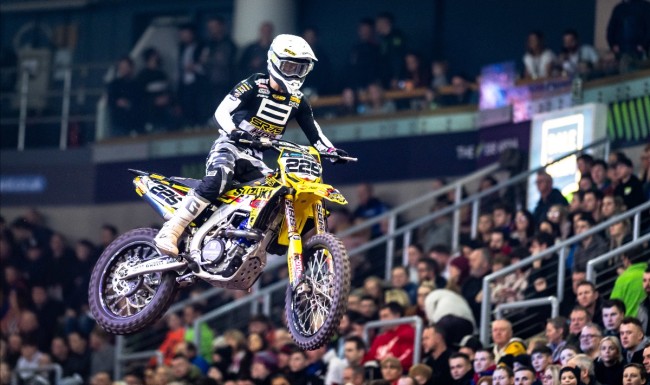 The opening round of the 2020 Arenacross Tour in Belfast will go down in indoor history.

“I just can’t help but get such a buzz from being inside the Arena with a packed home crowd” explained Rea shortly after riding his title winning Kawasaki Superbike down the start straight and into the centre of the course.

The crowd reached fever pitch as Crockard also rode around the course on his 2001 CAS Honda – the exact same bike he won the first ever indoor race staged at Belfast’s now famous Arena back in November 2001.

As racing took off, Wooldridge Honda rider Julien Lebeau who lead out the gate with an impressive performance in the Pro Lites Main Event, but eventual winner was Germany’s Brian HSU who took first place in both Main Events starting his Arenacross debut in style. Former 2019 Pro Champion Cedric Soubeyras was third.

Youth racing saw a shake up from Round One with Fro Systems rider Carl Osterman winning the Rookie Cup fending off pressure from Ben ‘Beanz’ Clayton. Ballyclare rider Charley Irwin and 2019 Supermini Champ Raife Broadly battled to the end taking a win each with Belfast’s Matthew Beattie in third. The home crowd cheered Charley to a race two win in the packed-out evening performance.

Drew Stock did the double, winning both races and leads the 65cc Youth Cup Championship. Dublin rider Jordan Kinsella captured the crowds hearts proving nothing is impossible. The Etec Apico CCM Racing rider went from a fan in the seats to a rider on the start gate in just a year. His ‘can do attitude’ and love for racing is an inspiring story!

The All Ireland Cup trophy was back in the hands of Belfast rider James Mackrel with Dylan Stynes and Jay McCrum in second and third.

The MCFederation Head to Heads were electric with Offset CBD rider Ashley Greedy once again securing his place on the Superfinal start line. There was a Barr vs Irwin affair as the two Northern Irish riders battled the one and a half lap race with BRT KTM Rider Martin Barr triumphant.

The well-deserved Superfinal crown went to Charles Lefrancois (SR75 Suzuki) who held a strong lead against newboy Brian HSU. ASA United Husqvarna rider Jack Brunell raced consistently with frequent battles with teammate Soubeyras who went down with only a few laps to go. To finish the night it was Geoff Walker’s team that took Belfast Round 2 Team Championship.

The Arenacross Tour now heads to Resorts World Arena Birmingham on January 31st and February 1st for rounds three and four of the 2020 Arenacross Tour. Tickets are still available via www.arenacrossuk.com