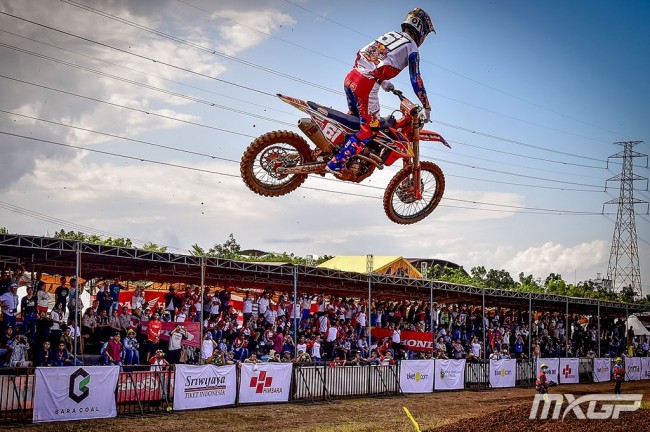 Tim Gajser won the Indonesian GP but this time he didn’t go 1-1!

The HRC Honda man holeshot race one and controlled the moto looking like he had barely got up sweat despite the humidity as he made it all look easy.

But race two didn’t quit go to plan. Gajser was leading again but Romain Febvre was catching the Slovenian when Gajser went down after going off track. Gajser got up in third and quickly passed Seewer for second but Febvre had too big of a gap to close down and the Slovenian settled for second as Febvre took well-earned win.

With a 4-1 Febvre took second overall with Seewer edging an unfortunate Max Anstie who rode fantastic to take second in race one but crashed on lap one of race two while looked to make a quick move on Gajser for the lead. Anstie came back through the sixth but missed the podium by a point.

Jorge Prado won the Indonesian GP but this time it was a tough one!

The normally flawless Spaniard holeshot race one but teammate Tom Vialle wouldn’t let him and go and kept the pressure on until, at the halfway point, Prado washed the front wheel into a right hander and hit the deck!

Vialle inherited the lead and held a five second lead for a while before Prado found his rhythm and began to close the gap. With three minutes to go Prado made his move on Vialle and, with the Frenchman unable to fight back, Prado took a hard earned win from his increasingly confident teammate.

Race two was even tougher for Prado! The Spaniard got the lead out of the start but Vialle put a couple of surprisingly aggressive moves on Prado and that flustered the championship leader who seemed to totally lose his rhythm.

Jago Geerts, who crashed out of race one, took advantage, passing Prado then Vialle and Thomas Kjer Olsen did likewise to get into second and leave Prado in fourth. Things then got worse for Prado as Jed Beaton and even Brian Moreau made passed on Prado to push him down to sixth!

But when Moreau made the move it seemed to wake Prado up and he worked his way quickly by Moreau and then Beaton to get back to fourth showing some of his famous intelligent line selection.

He then focused his attention on his teammate Vialle and eventually made the move on him to get third. Back up front, and Geerts had pulled a two second lead on Olsen with just a couple of minutes to go until, out of nowhere, Geerts went down coming into the waves section and threw away the win!

He would remount take fourth but it was Thomas Kjer Olsen who took a superb win from Prado who just held off teammate Vialle for second.

Overall winner Prado said: “My teammate was fighting very hard with me. It’s so tough out here, the lap time is so short we did so many laps, but happy with the win.”