Report: Musquin and Cooper win in a hot and humid Florida 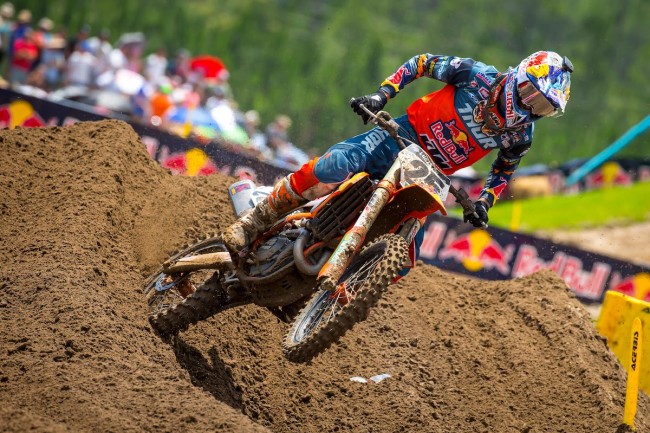 JACKSONVILLE, Fla. (June 22, 2019) – The Lucas Oil Pro Motocross Championship, sanctioned by AMA Pro Racing, made its anticipated return to the state of Florida for the first time in 22 years on Saturday, as WW Ranch Motocross Park made its debut as the newest venue to host a round of the world’s most prestigious off-road motorcycle racing series. The US Assure Florida National presented the most challenging conditions of the season, as a difficult sand track and hot, humid temperatures combined to push riders to the limit. At the end of a pair of grueling motos, Red Bull KTM Factory Racing’s Marvin Musquin claimed his first overall victory of the season in the 450 Class, while Monster Energy/Star/Yamaha Racing’s Justin Cooper emerged to take the first professional win of his career in the 250 Class.

The opening 450 Class moto saw Red Bull KTM Factory Racing’s Cooper Webb surge to his class-leading third MotoSport.com Holeshot over Team Honda HRC’s Ken Roczen. The spirited foes went at it over the course of the opening lap, with Roczen attempting several passes that were ultimately defended by Webb. Webb was able to keep the championship co-leader behind and complete the opening lap with the lead, but Roczen continued to attack and soon seized control of the moto. As this captivating battle unfolded, fellow championship co-leader Eli Tomac was mired in 18th aboard his Monster Energy Kawasaki and had to make a series of tough passes in the opening laps just to break into the top 10.

Once in the lead, Roczen was able to assert himself at the front of the field while Webb began to lose ground to his teammate, Musquin. The Frenchman sensed the opportunity to pass Webb for second and wasted little time in taking advantage of the first opportunity he got to drop his teammate to third. From there, Musquin set his sights on Roczen. Soon enough the former MXGP rivals were duking it out for the lead. Musquin searched for every possible line in his quest to find a way around Roczen, but the German consistently countered those moves. Musquin’s relentless pressure on Roczen almost led to a crash from the Frenchman, but he saved it and never let up, eventually making the pass stick shortly after the halfway point of the moto.

The clear track allowed Musquin to storm out to a comfortable lead over the field, while Roczen settled into second. With about 10 minutes left in the moto the battle for third heated up between Webb and Rockstar Energy Husqvarna Factory Racing’s Jason Anderson. The race’s top qualifier appeared to be quicker than Webb, but he was unable to make the pass happen as Webb responded by picking up his pace. Anderson didn’t give up, however, and regrouped for a couple laps to prepare for one final push, quickly closing back in on Webb’s rear fender before making an impressive pass for the position. Anderson’s late surge pressed on, and with two laps to go he found himself mere bike lengths behind Roczen. However, the German stepped up in response to the pressure.

Musquin was dominant en route to his first moto win since the 10th round at Unadilla last August, crossing the line 7.7 seconds ahead of Roczen, with Anderson right behind in third. Webb soldiered home in fourth, while Rockstar Energy Husqvarna Factory Racing rookie Zach Osborne was fifth. Tomac never made his presence felt in the moto, but battled through the field to finish seventh.

No doubt disappointed in his first moto effort, Tomac seized the moment to start Moto 2 and took his first MotoSport.com Holeshot of the season ahead of Osborne. Anderson slotted in behind his teammate in third, while the KTM’s of Musquin and Webb, along with Roczen, gave pursuit. With a clear track ahead of him Tomac sprinted in the opening stages in an effort to build a margin that he could manage as the moto continued. Anderson applied pressure on Osborne and made an impressive pass to take over second. Osborne attempted to fight back, but to no avail.

Tomac needed just over a lap to storm out to nearly a five-second lead, which left everyone else to battle for the remaining spots on the podium. Anderson gave chase from second, while Osborne was left to deal with Musquin for third. The rookie held off his training partner for a while, but the Frenchman utilized alternate lines to make the pass and move into third.

The field stabilized through the middle portion of the moto, with multiple seconds between each rider in the top five. However, the big-picture battle in the championship changed after Roczen went down while running fifth. Roczen and Tomac entered the race tied atop the point standings, but Roczen began the second moto with the upper hand. Roczen remounted in seventh, but continued to lose positions. As this unfolded, Anderson’s pace dropped dramatically and he dropped from second to fourth, moving Musquin up to second and Osborne up to third.

Musquin managed to get Tomac in his sights late in the moto, but the reigning series champion responded. As the moto wore on, Musquin’s pace dropped. He lost touch with Tomac and then lost considerable ground to Osborne in third. With just three laps to go, Osborne made the pass on Musquin to take over second.

Tomac managed a perfect moto to take his fifth checkered flag of the season, 4.1 seconds ahead of Osborne. Musquin held on for third.

Musquin’s 1-3 scores carried him to the eighth overall win of his career and ends a six-race winless streak. Despite his slow start to the afternoon, Tomac’s win in the final moto vaulted him to the runner-up spot in the overall classification (7-1), while Osborne’s late pass on Musquin landed him third (5-2).

“I tried [to catch Tomac]. I knew I had the overall, but winning both motos is the best,” said Musquin. “I just kind of ran out of energy there at the end. I’m a little disappointed. I didn’t see Zach coming [from third], but it’s still good. I salvaged third place [in the moto], and that was good enough to earn the overall.”

Tomac leaves Florida with a six-point lead in the 450 Class standings over Roczen, who finished sixth (2-10). The win allowed Musquin to climb from fifth to third, 31 points out of the lead.

“[The difference from Moto 1 to Moto 2] was the result of a bad start in the first one. Not sure what happened there. I got a much better Moto 2 start and had a better feel on the bike,” explained Tomac. “I’m happy to get through the heat today. The sand was a serious challenge and it changes things up for us, but overall it was a good day.”

The first 250 Class moto of the afternoon got underway with Troy Lee Designs/Red Bull/KTM rookie Derek Drake capturing the first MotoSport.com Holeshot of his career over the Monster Energy/Star/Yamaha Racing duo of Cooper and Ty Masterpool. Championship leader, Adam Cianciarulo, found himself buried deep in the top 10 aboard his Monster Energy/Pro Circuit/Kawasaki. Out front, Drake took full advantage of his first opportunity to lead a professional race and he established a multi-second lead over the field. Cooper and Masterpool settled into second and third, while Cianciarulo went to work from an eighth-place start.

With the lead well in hand through the first five minutes of the moto, Drake gave it away when he crashed hard through one of the track’s section of rollers. That allowed Cooper to inherit the lead, while GEICO Honda’s Chase Sexton charged his way up to second and Rockstar Energy Husqvarna Factory Racing’s Michael Mosiman into third. A patient Cianciarulo rode just outside the top five for several laps behind Monster Energy/Star/Yamaha Racing’s Mitchell Oldenburg, but he eventually found his way around to move into the top five.

A determined Sexton was able to close to within a second of Cooper and began searching for different lines in an effort to mount a challenge on the top spot. Cooper did well to keep Sexton at bay, and the lead hovered around a second throughout the middle portion of the race. Sexton’s patience eventually paid off and with just under 10 minutes left in the moto, when he made the pass on Cooper and quickly put some distance between them. It wasn’t long before Sexton enjoyed a multi-second advantage on the field.

Sexton rode strong through the remainder of the moto and prevailed with his first career moto win. Cooper followed in the runner-up spot, 8.2 seconds back, with Mosiman rounding out the top three. Monster Energy/Star/Yamaha’s Dylan Ferrandis put in a strong come-from-behind effort to pass Cianciarulo late for fourth, while the winner of the first four rounds of the season settled for fifth.

The start of the second 250 Class moto saw a slew of Monster Energy/Star/Yamahas storm to the front, with Oldenburg emerging with the MotoSport.com Holeshot. However, his time in the lead was short lived as both Cooper and Ferrandis charged into the top two spots. Mosiman soon slotted into third, with Cianciarulo in fourth. In the early stages of the moto Sexton pulled off into the mechanics area and eventually retired from the race, ending his hopes of a first career win.

Cooper and Ferrandis ran a stellar pace out front, which allowed them to pull away from Cianciarulo, who made the pass on Mosiman to take over third. Ferrandis kept his teammate honest and stayed close, but Cooper maintained his hold on the top spot and started to inch away as the moto wore on. Together, they opened up a double-digit advantage over Cianciarulo.

Cooper appeared to have the moto win in hand, but Ferrandis stored his energy for a late push and with less than 10 minutes left in the moto the Frenchman pulled the trigger. He closed in on Cooper and made the pass with ease with just over seven minutes to go. From there, Ferrandis carried on to his first moto win of the season, crossing the line 9.3 seconds ahead of his teammate, while Cianciarulo finished in a distant third.

Cooper’s consistent 2-2 results were enough to give him the first professional win of his career, edging out Ferrandis (4-1) by a single point. Cianciarulo saw his four-race win streak come to an end in third (5-3).

“[I won] because I got out front, and that felt good. That [Moto 2] was the longest moto of my life. I’m just so spent right now,” said Cooper. “To [win] in this heat really says something, and it feels great to finally get this [the win] off my back.”

Despite seeing his win streak come to an end, Cianciarulo still has a firm hold on the championship point lead, where he sits 18 points ahead of Cooper. Ferrandis is third, 35 points out of the lead.

“I don’t want to take anything away from these guys. They were ripping all day and were just better than me,” explained Cianciarulo. “I just didn’t feel great today. I didn’t really gel with the track, and my body didn’t really feel great. I’m fortunate to have the start like I had with all those wins, and I’m happy to leave here with a podium when I wasn’t at my best.”

The 2019 Lucas Oil Pro Motocross Championship will reach its halfway point next Saturday, June 29, with the MB Tractor & Equipment Southwick National from New England’s legendary The Wick 338. First motos from Southwick, Massachusetts, can be seen live on MAVTV at 10 a.m. PT / 1 p.m. ET, while second motos can be seen via tape delay on NBC Sports Network at 4:30 p.m. PT / 7:30 p.m. ET. Additionally, all of the action can be live-streamed with the “Pro Motocross Pass” via the Gold channel on the NBC Sports app.