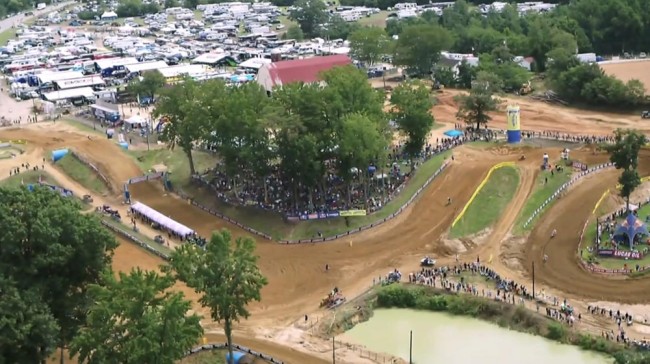 Dylan Ferrandis took the overall win on a tie-break with Ken Roczen after going 2-1 to Roczen’s 1-2 on the day at Budds Creek but he almost went 1-1!

In the opening moto Roczen made his customary early passes on a lightening first lap but by the end of the race Ferrandis had worked his way into second and was on the German’s back wheel searching desperately for a way by but Roczen fought hard to hold on for the win.

Race two and Roczen again took the early lead passing Webb but once again Ferrandis worked his way into second, passing Sexton and Tomac to do so, and this time he had time to catch and make a crucial pass on Roczen for the overall win and end the day tied on points ensuring he kept his substantial championship lead.

Eli Tomac rode well for third overall but couldn’t make the move on Roczen in race two despite being right there at the end of the moto.

Jeremy Martin took the overall win with a 3-1 after Justin Cooper had a similar day to Unadilla after a great ride in moto one to win despite a crash only to take fourth in race two without troubling the top three saying he has been sick over the last few days and didn’t have the energy required for the second moto.

It means Jett Lawrence who went 2-2 on a solid day, has gained one point on Cooper with the gap now down to three points with just three rounds to go! Martin despite the win is still 60 points down.

Hunter Lawrence came from outside the top ten to sixth in race one despite clutch and google issues and then took third in race two after finally getting a decent start, the older Aussie proved he still has the speed but the starts have been letting him down lately.