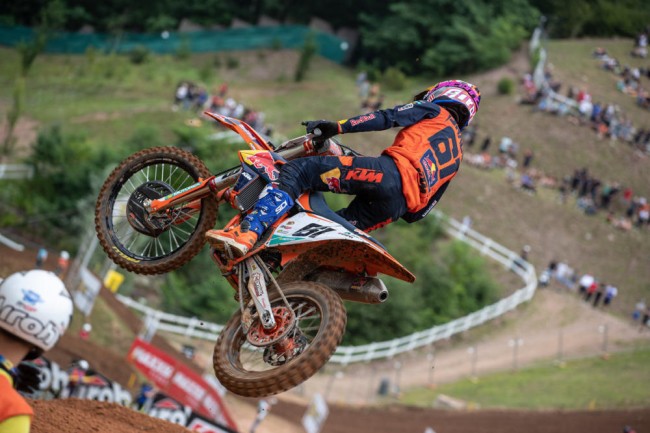 It’s game on again in MXGP after Loket! Jorge Prado took his first MXGP victory of the season as Tim Gajser had his first big crash of the year in race two to finish back in 15th and he now only has an 11 point advantage in the championship over Tony Cairoli!

Prado took the race one win holding Gajser off the entire moto and even a late race flurry of effort still wasn’t enough for Gajser to find a way by the stubborn Spaniard. Tony Cairoli had a below par race one finishing sixth but made amends in race two. A better start in second behind Prado and an instant pass for the lead by turn two saw Cairoli control the race win to ultimately make big points on Gajser overall.

Gajser was running fourth with the leaders in sight when his back wheel went sideways on landing over a roller, throwing him off the bike violently and forcing the HRC Honda rider into the pits to straighten out the bars and levers. Credit to Gajser though, he went back out and rescued some valuable points to get back to 15th place – he never gives up!

Prado said: “The second moto was hard I knew it would be hard. The track was really rough, it was so physical it was hard to hold onto my bike. I could keep my nerves and ride as smooth as I can. Let’s keep it rolling.”

Jeremy Seewer had his best ride of the season with a 5-2 giving him third overall and this was the sort of ride Seewer will be expecting from now on as he recovers his physical fitness. Glenn Coldenhoff was good all day running the top five for fifth overall while Romain Febvre will rue a bad start and a crash in race two that limited him to tenth in the moto after a third in race and it meant only gaining three points on Gajser on the day, despite the Honda rider’s first big mistake of the season.

Shaun Simpson had a terrific ride in race two with a seventh to give the Scot his best result of the year on a track that you wouldn’t expect to be his forte!

In MX2 Mattia Guadagnini bounced back from a tough Oss GP to win his second Grand Prix of the season after a brilliant win in race one was backed up with a consistent fifth in race two despite a small tip-over! However, it wasn’t quite enough to get the red plate back with Maxime Renaux’s second overall with a 5-2 score and a bad start/good start scenario to hold onto the series lead but by just two points!

Thibault Benistant took a brilliant second race win to put himself third on the podium despite a ninth place in race one after not the greatest start. But, like Guadagnini, the two rookies actually look more comfortable in the lead than they do in the pack fighting for position! Benistant held off the challenge of Renaux and even pulled away from the championship leader.

Jed Beaton was fourth overall after great ride in race one for fourth and hard ride up to eighth in race two with Ruben Fernandez (4-7) staying in touch in the world championship fight, fifth overall, and fighting hard in both motos with his customary aggression.

Tom Vialle had a mixed return to racing. The world champ rode very well in race one to take second behind teammate Guadagnini and keeping the pressure on the entire moto but race two was a disaster with a first turn crash and then another crash coming through the field leaving Vialle with no points in race two – but he showed the speed is there again after injury!

Conrad Mewse had a DNF in race one but did take tenth in race two in a good ride and his first top ten of the year – light at the end of the tunnel?