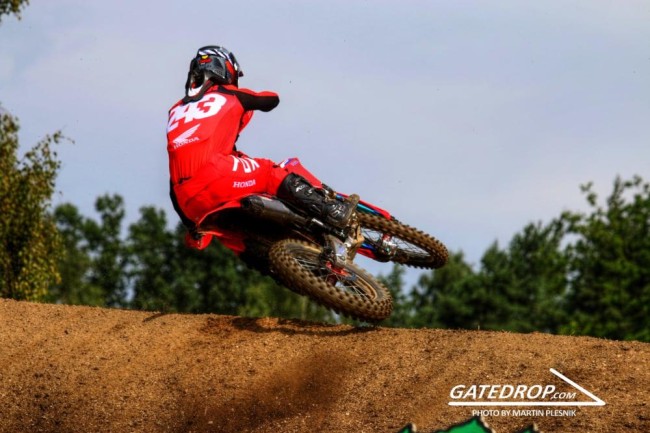 A gutted Jeffrey Herlings crossed the finish line in pain and disbelief after he threw away the GP win on the last lap with four turns to go while lying second in race two at Lativa just behind leader, Jorge Prado, gifting title rival, Tim Gajser, the top step of the podium even through the Slovenian didn’t win a moto!

Herlings passed an aggressive Prado in race one after Prado nearly put Herlings off the track and even though Gajser got into second and tried to chase the Dutchman, Herlings ran away to a ten second win. Prado then got into with Cairoli in late-race duel for third and nearly put his Italian teammate off the track with Cairoli angrily gesturing once he made the move into third with an aggressive pass himself!

Race two, and despite not many bumps after some bizarre lunchtime levelling, the circuit was still tricky thanks to heavy rain and Cairoli was the first to crash on the slick circuit, losing both wheels entering the right hander while fourth. Febvre then crashed out of the lead dropping him back to fourth as Prado inherited the lead with Herlings second and Gajser third.

Nothing much happened for the next fifteen minutes but the last ten Herlings and Gajser really made a push for Prado. Herlings was almost on the back wheel of the Spaniard but Prado wouldn’t give in and fought hard just about keeping Herlings at bay. With a couple of laps to go Herlings was there again and on the last lap just over a second back but a backmaker, in a world of his own, held the Dutchman up ending his chance of a double moto win but then, with only a few turns to go, Herlings hit the deck in a right hand berm and threw away the GP win and crucial points he would have made on Gajser in the championship!

Gajser inherited the overall win with two steady second places and a much more measured approach than Lommel absolutely paying off. He has increased his championship lead from six to 13 over Romain Febvre and instead of gaining five points on Gajser, Herlings lost one point to go 43 back instead of what should have been 37 behind until the crash- this one will hurt Herlings all the way back to Holland.

Gajser said: “That was the goal coming here (to be consistent) the last couple of weeks I was struggling with consistency and too many crashes. Today I just came here to enjoy I was maybe putting too much pressure on myself. We were a bit lucky with Jeffrey going down on the last lap. I am happy with the race.”

Herling said: “What can I say. Is there anyone more unlucky. I just needed to roll through four more turns! I felt like I could pass him but I didn’t want to take the risk, just to make sure I got the overall then I still went down all by myself in the turn- went through the berm. Super devastated for myself and the team but it’s racing and I did it all by myself. I already can’t wait for Turkey in four weeks, Hopefully the pain will be gone and I can train a bit and be better than what I was today. Try and hunt those boys down, a lot of racing left, I don’t give up on the dream.”

Second moto winner Prado, who is 15 points back of Gajser but up to third in the championship ahead of Cairoli, said: “It was a great day, first moto I couldn’t get the rhythm, second moto I was feeling more relaxed. Good starts, physically I am feeling every weekend better and better. Riding is good, team is doing great.”

A fairly mundane pair of MX2 races thanks to the constant track levelling and lack of bumps and technicality meant passing wasn’t easy but Maxime Renaux did what he had to do in both motos to catch and pass race leader Mattia Guadagnini for the lead in what was probably the best performance of his career.

Renaux was in a class of his own in race one and pulled away to a brilliant win with Guadagnini a great rebound from Lommel in second and Geerts a lonely third.

Race two again was pretty processional at the front until the last five minutes when Guadagnini started to reel Renaux in again after losing the lead early – but he took Jago Geerts with him as the rain started to come down and the bumps finally started developing allowing Geerts to show his skills. Geerts made the move on Guadagnini but, even though he was slightly quicker than Renaux at the end, the Belgian had left his charge too late as Renaux took the win and big points in championship. The Frenchman is now 34 ahead of Guadagnini and 36 ahead of Geerts.

Tom Vialle inched closer to his true form with fourth overall in two rides from the mid-pack including an aggressive pass on teammate Hofer in the second moto! But Vialle will be looking forward to the three week break and getting his hand back to 100% and more riding under his belt.

Thibault Benistant was riding very well yet again a strong fifth in race one but a bad start meant a tough ride into seventh in race two but he still took fifth overall putting three Kemea Yamaha’s in the top five.

A first race crash by Ruben Ferndanez ruined his title challenge even if he rode a strong rebound race in the second moto to take fourth, but he is now a huge 57 points behind Renaux and sits fourth in the series.

Podcast! In our latest Gatedrop podcast (like/follow/subscribe) American, Andrew Short, discusses his successful AMA supercross and motocross career as well as his new rally career with Yamaha – plus he gives his thoughts on the MXGP round in Lommel! Get it on iTunes here or Spotify or YouTube below: