Report and results: Barcia on top at Millville! 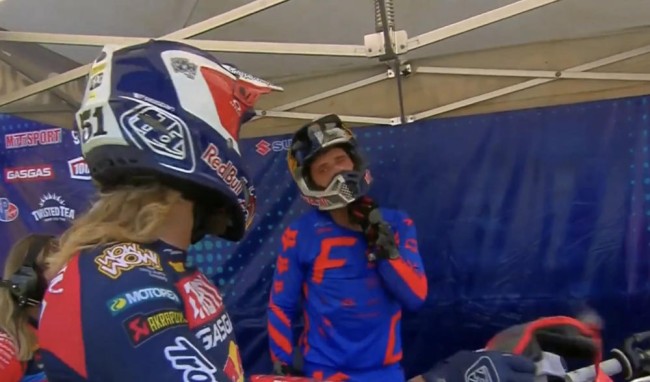 Justin Barcia took a historic first ever overall AMA motocross win for Gas Gas with a 1-2 score at Millville and his moto one win was classic Barcia!

Justin grabbed the holeshot but had Cianciarulo on his tail and, after some bad blood between the pair last weekend, they set an intense pace at the beginning with Cianciarulo putting the pressure on but then he washed out and went down hard in the sweeper ending his day. From there Barcia had Ferrandis all over him with a charging Tomac coming from way back right there too but everything Ferrandis tried, Barcia countered and the Gas Gas man hung on to take a win fuelled by determination.

In race two Barcia got the holeshot but couldn’t fend off a flying Ken Roczen who rode a marvellous race after a first turn crash in race win that left Kenny with a DNF after staying in the ground for a quite a while. Thankfully Roczen, despite getting rode into by teammate Sexton, was okay and took his revenge in race two to take a brilliant win. Roczen set a pace that only Barcia could match and forced Barcia to eventually settle for second with Roczen taking a much needed race win and clawing some important points back on Ferrandis.

After a second in race one, Ferrandis went down twice in a frustrating moto two but the Frenchman used his late race speed and determination to get back to fifth by the end after a couple of late race passes to stop the bleeding in the points and he is now 32 points up on Roczen. But Ken will be relieved it’s not more after that first turn crash!

Barcia said: “A lot to take in, it was a great day. It’s a major effort. The track was gnarly today. Crazy battle first moto, tried chasing Kenny that while moto but couldn’t get him at the end. Stoked on the overall it feels amazing.”

Roczen said: “I got banged up pretty good – I had to make sure my ribs weren’t broken. I’ll be really sore tomorrow. As soon as I checked myself there was no question in my mind I would come back out here. That’s what we were born to do. I knew I didn’t have the best gate pick, I got pretty lucky and made it work. I did all I could for what it was. I’m happy with how we ended it.”

Jeremy Martin took a double race win to dominate his home round at Millville despite still dealing with the pain of broken fingers. Martin was a flurry of intensity all day running down teammate Jeremy Cooper in race one and going flag to flag in race two – but still appearing to never let up until the checkered flag! Martin showed what might have been this year if he hadn’t got injured but he is certainly showing his toughness to come back despite the injuries and fight for another win – one he will not forget in the hurry with the huge support of his home fans.

A 2-3 by Justin Cooper was enough to take the red plate after a tough day for Jett Lawrence. The young Aussie had two terrible starts then got caught in some carnage in race two when he ran into Pierce Brown who was standing on a jump after a crash that resulted in bikes and bodies going everywhere!

Jett caught back up to sixth just behind Hunter who also didn’t get the best of starts either moto and it’s something HRC Honda will be concerned about for this title especially with Cooper starting top three in most of the races right now. Jett still salvaged fourth overall but is now six points back of Cooper with Hunter 33 back of the Star Racing Yamaha man.

“This was definitely a nightmare of a day,” admitted Lawrence who says he needs to improve the starts but he won’t be giving up.

Cooper though wasn’t totally happy with his day saying his intensity wasn’t there and he wants to be better in the upcoming rounds, despite now being the championship leader!

Michael Mosiman has been riding great all year but hasn’t had the luck he deserved until today when two decent starts got him a second career podium with a 3-2 on a great day for Gas Gas.