Renaux on his controversial GP win 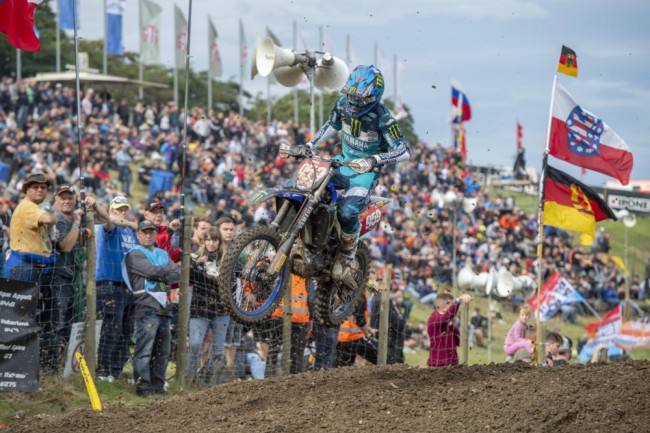 Monster Energy Yamaha Factory MX2 rider Maxime Renaux won his third Grand Prix of the season in round 11 of the FIM World Championship in Teutschenthal, Germany. The Frenchman also extended his championship lead to 85 points. Jago Geerts, fourth in Teutschenthal, is now second in the championship. Thibault Benistant (12th) had a bad day at the office.

Regularity. That’s the keyword in a championship chase. And that’s exactly what Renaux is showing. Even on the rough and extremely rutty Talkessel circuit in Teutschenthal, not his favourite track.

Crash Benistant
The Monster Energy Yamaha Factory MX2 riders got off to a good start on their YZ250FM in the first race, with Renaux, Benistant and Geerts right behind each other in fourth, fifth and sixth place. Benistant tried to pass his teammate Renaux, but jumped off the track and crashed. The reigning EMX250 champion had to resume in 30th position. Meanwhile, Renaux and Geerts passed Längenfelder to take third and fourth place. Jago was putting pressure on his teammate, but had to slow down halfway the race because of arm pump. At the end, after a small mistake, Jago lost one more place to Beaton and finished fifth. While Benistant fought back to 16th place, Renaux put in a good late charge. The Frenchman came close to the leaders, but just ran out of time.

Penalty Vialle
Another great start of the Monster Energy Yamaha Factory MX2 riders in race 2, with Renaux in second place and Benistant and Geerts right behind him. For Benistant race 2 was kind of a deja vu. Again, the young Frenchman had an early crash – a big one this time, luckily without getting injured – coming out of turn 5. Geerts inherited third place. While Renaux and Geerts settled for second and third position, Benistant had another catch up race up his sleeve. Thibault produced some nice passes to finish ninth.
Renaux took his seventh overall podium in a row and was eventually even rewarded with the Grand Prix victory after Tom Vialle received a penalty for ignoring a waved yellow flag. Renaux’ third GP win of the season. Geerts finished two points shy of the podium, Benistant finished 12th overall.
Renaux now leads the FIM World Championship by 85 points over teammate Geerts. Benistant dropped from 4th to 6th place in the championship classification. Yamaha is still leading the manufacturers classification.

Renaux: Winning a Grand Prix after a penalty for another rider feels a bit bizarre. It’s not the best feeling, to be honest. I prefer to win without a penalty. But rules are rules. I don’t get gifts either. I was coming back on Vialle when he ignored the yellow flag. He jumped, I didn’t. I lost a few seconds and wasn’t focused anymore. Teutschenthal is not my favourite track at all. Still, I managed to take the overall win and extend my championship lead again. A great day.”

Geerts: “I’m struggling to get on the podium lately. Nevertheless, my riding wasn’t that bad. I just didn’t have the same speed of the two, three riders in front of me. In race 1 I was coming back on Renaux when I got arm pump. On my left arm this time. I hope it won’t get as bad as my right arm used to be. I had to slow down. The second race was better. I’m now second in the championship. 85 points is a lot. But everything is still possible, I will keep on fighting.”

Benistant: “This was a race I want to forget as quickly as possible. The only good points: my two starts and the fact that I didn’t want to give up. In the first race I tried to pass Renaux in the first lap, but went off the track and crashed. I had to fight back from 30th place, not easy on this technical track. Another good start in race 2, but again, I made an early mistake and had a big crash. My bike was a bit bent, luckily I didn’t get injured. Hopefully, I have some more luck next week.”