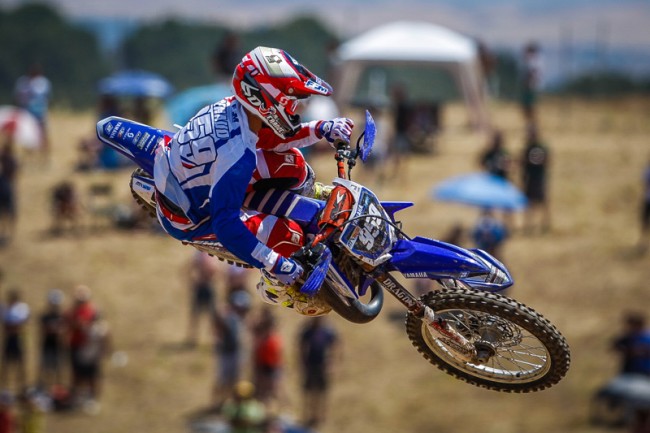 The depth of talent in the premier junior class is absolutely mind blowing and this weekend was a good example of how exciting the future of motocross is. When the gates fell it was the youngest rider in the class,KTM Factory Juniors Jorge Prado who got off to a killer start and claimed the first Fox Holeshot but was pushed wide and instantly dropped outside of the top five.

At the end of lap one it was Kemea Yamaha Yamalube’s Maxime Renaux who emerged in the lead with Spain’s heavy hitter Ruben Fernandez hot on his heels. Fernandez showed a wheel to Renaux on a number of occasions and was flying the flag high for his home nation but couldn’t make a pass stick.

KTM Factory Juniors Conrad Mewse didn’t get off to the best start but was absolutely hauling and soon found himself vying for the opening race win after passing Fernandez with a few laps to go. France’s Stephen Rubini and Australia’s Hunter Lawrence also put in strong performances to finish within striking distance of the winner Renaux and round out the top five.

As an epic end to what was an amazing 2015 FIM Junior Motocross World Championship, both of the race one front runners Kemea Yamaha Yamalube’s Maxime Renaux and KTM Factory Juniors Conrad Mewsefought tooth and nail for the final race win and championship overall.

When the gate dropped Conrad Mewse was right where he wanted to be, up front and ruling the roost. That turned out to be briefer than he expected as surprise contender Richard Sikyna from Slovakia blitzed past him for the early lead. Mewse responded almost immediately but didn’t get a chance to enjoy the lead as the race one winner Maxime Renaux was already on him.

Without wasting anytime Renaux put the pass on Mewse, but it was clear Mewse wasn’t going to go down without a fight and responded immediately. In a demonstration of motocross at it’s finest, Renaux and Mewse went bar to bar, not only for the race win, but the 2015 FIM Junior 125cc motocross world title.

The race went down to the wire, and was hands down one of the best races the FIM Junior 125cc World Championship has ever witnessed, but it was Maxime Renaux who held on ever so tightly for the race win and the gold plate.

Meanwhile in the shadow of that awesome battle, Sikyna rode home in a lonely third while Australian Hunter Lawrence crossed the line in an unchallenged fourth. Yesterday’s Group B top qualifier Mathys Boisramerounded out the top five.

Taking home the most prestigious youth title of the year was Kemea Yamaha Yamalube’s Maxime Renauxwho did so with a hard fought double race victory. KTM Factory Junior’s Conrad Mewse came so close but had to settle for second while Australia’s Hunter Lawrence rounded off the podium.