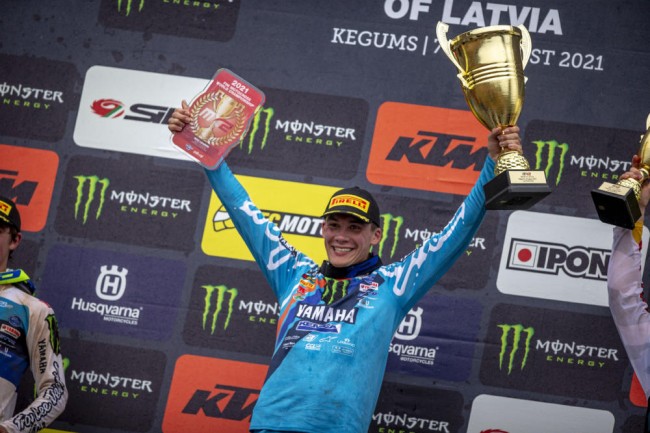 The Monster Energy Yamaha Factory MX2 Team enjoyed another great weekend, at round 7 of the FIM World Championship in Kegums, Latvia. Maxime Renaux got his first ever double moto win and extended his championship lead out to 34 points. Jago Geerts finished second, Thibault Benistant fifth.

The Zelta Zirgs circuit in Kegums is a regular in the FIM World Championship. Last year the technical sand track hosted the first ever triple-header (after a long break due to a worldwide lockdown because of covid-19), with Jago Geerts dominating the last two races. This year, the Latvian Grand Prix concluded the first part of the championship, before  heading into a four week break ahead of the Turkish double-header.

The Monster Energy Yamaha Factory MX2 riders arrived in Latvia with a lot of confidence after taking first, third and fourth place in Lommel last weekend. Renaux set the second fastest time in qualifying. He was one tenth of a second faster than Benistant in third. Geerts qualified in eighth place.

Renaux felt great on the sketchy Latvian sand track. The championship leader, who was fifth in the first turn, was clearly a man on a mission. In just four laps he was already in the lead after some superb passes on Hofer, Geerts, Beaton and finally Guadagnini. The Italian tried to react, but without success. Renaux was in a league of his own. With ten minutes left on the clock Geerts – who was suffering from arm pump in the beginning of the race – won the battle for third place by passing Beaton. Benistant had a lot of work to do after a mediocre start (10th). As if that poor start wasn’t enough, the rookie was also hit by a rock on his collarbone. Thibault showed a lot of determination and still managed to finish fifth.

The second race was almost a carbon copy of the first one. Guadagnini took another holeshot and was closely followed by the Yamaha duo of Renaux and Geerts. Again, Renaux only needed a few laps to take the lead and pull away from the rest of the pack to take his first ever double moto win. Geerts wasn’t bothered by arm pump anymore, but needed too much time to pass Guadagnini for second place. The Belgian put in a last effort to close the gap on teammate Renaux but ran out of time. Benistant – only 12th in the first turn – fought through the pain barrier in the second race to finish seventh.

Like one week ago in Lommel, all three Monster Energy Yamaha Factory MX2 riders finished inside the top-five overall. Renaux extended his championship lead out to 34 points and Yamaha – in the manufacturers classification – out to 20 points.

After four consecutive weeks of racing, the FIM World Championship now takes a four-week break. The championship resumes on September 5th in Turkey.  However, the Monster Energy Yamaha Factory MX2 Team will participate in the Belgian championship in Balen next week.