Renaux and Adamo on Ottobiano 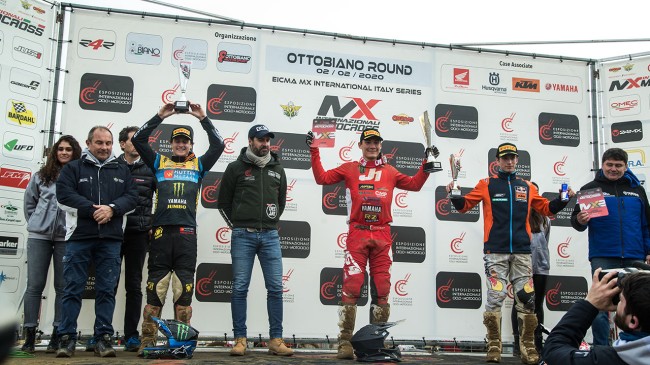 At Ottobiano (Pavia, Italy) for the second round of the “Internazionali d’Italia MX”, Renaux won in MX2 and conquered the red plate. Very good result for Adamo too as he made the holeshot, led the race at the beginning and finished 6th. In MX1, solid performance for Jacobi as he finished 4th and is now looking close to the TOP FIVE of the General Classification.

After the past warm weekend at Riola Sardo (Oristano, Italy), the circus of motocross moved to the cold Lombardia for the second round of the Internazionali d’Italia Motocross Eicma Series. The circuit that hosted the event was Ottobiano, in Pavia’s province, and the surface was once again made by sand. The weather was cold and foggy and the riders were put to the test for the whole day.

After the positive feelings obtained at the first round, at Ottobiano Team SM Action Yamaha started to collect the results of the hard work that has been made during the long winter preparation.

In MX2, Maxime Renaux #959 made an excellent performance: since Timed Practice the French was very fast: he was the quickest of his group and he made it to the 2nd starting gate of the grid. Renaux then made a perfect race. After a great start he was 2nd, and in 4 laps-time Maxime took the lead of the race, riding with authority until the checkered flag, and putting an unsustainable pace against his opponents: the rider in second place had more than ten seconds of gap from him. Thanks to this awesome victory Maxime took the lead of the MX2 Championship, and he conquered the red plate. In the “Supercampione” race, the French made a good performance too; after a good start that saw him in the Top 10, Maxime finished 6th. He was the best rider of the MX2 in between a crowded group of MX1 riders.

In the same class, Andrea Adamo #80 had his redemption after the bittery weekend of Riola Sardo. After a discrete 9th place in Group 1 Qualifying session, Andrea made the perfect start and after turn 1 he was in 1st place. He led the race for the first three laps, but then he lost a little bit of pace and he finished 6th. In the “Supercampione” race he put too much effort on trying to recover after a lazy start: he made a mistake and he was forced to retire during lap 2.

In the MX1 class, the German Henry Jacobi #29 kept making some experience considering the debut in the MXGP World Championship. He improved his performance considerably after last weekend’s race. In qualifying Jacobi was 3rd fastest and showed good speed in this insidious track. At the race he passed in 7th place after lap 1, but then he made some quick lap times and he finished in 4th place. In the “Supercampione” race the German crashed after 2 turns from the start. He jumped back on his bike and he recovered well, but then, at lap 6, he decided to go to the box while he was in 18th place.

The third and last round of the “Internazionali d’Italia Motocross Eicma Series” will take place next weekend at Mantua Circuit.

Maxime Renaux #959: “The race went well. I actually started the weekend very well since Qualifying Session when I was the fastest of my group. At the race, then, I started straight away with the top riders and after 4 laps I took the lead. I rode well and I did not make any mistakes, so I won the race with a discrete distance from the 2nd. In the “Supercampione” I started a little bit further back than before but I recovered well and I finished in 6th place, but 1st of the MX2. The circuit was well prepared and it was an excellent test bench to continue the development of our bike. After all, I am very happy about my performance”.

Andrea Adamo #80: “Today it was really a beautiful day! I finished 9th in Qualifying Session, even though I could have made it better, but at the race I made the perfect start, I obtained the Holeshot and I led the race for three laps. In the following laps I slowed down a little so I finished the race in 6th place. I am happy for my result… I really needed it after Riola Sardo’s race! In the “Supercampione” race I started out of the top 10 and while I was trying to overtake, I landed badly after a jump and I fell off. The consequence of that was my retirement from the race. I am really excited as me and the team are working well… I will see you all at Mantova, thanks”.