Reed, Stewart and Dungey on A1 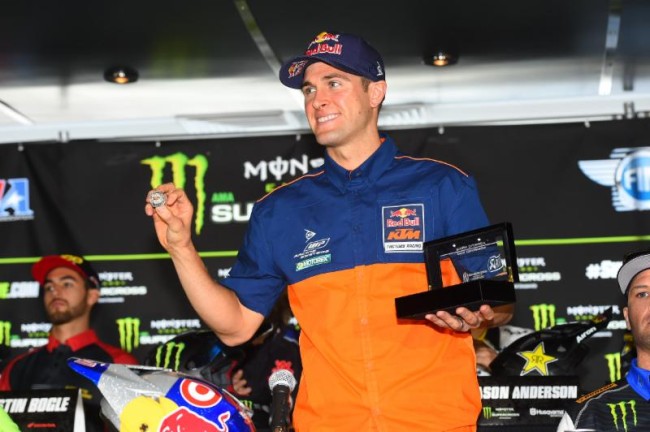 Red Bull KTM’s Dungey was presented his 2015 Monster Energy Supercross Championship ring, while General Mills made the formal announcement that Dungey will grace the cover of the Wheaties box, which has already started to roll out in stores across the country.

“It’s great to be back,” exclaimed Dungey, who will chase a third title in 2016. “New year, new season. The past is the past and we’re excited to look forward to the new season. With our training [at the Baker Factory], we always seem to have race scenarios going when we’re practicing, so I feel comfortable coming into a new season. I hope we can match last year, if not top it. It’s not going to be easy, but if we execute and do our job like we practice, hopefully we’ll top the list.”

The return of Team Yoshimura Suzuki Factory Racing’s Stewart, who won 450SX Class titles in 2007 and 2009, has been highly anticipated after missing the entirety of the 2015 season.

“I’m excited to be back,” said Stewart. “As many years you come up here, the feeling is always the same. It’s tense and everyone is ready to get out on the track. And I could look at it as I’m one of the old guys or I could look at it as I’m the more experienced guy. This off-season was one of the best year’s I’ve ever had and I’m looking forward to all the positives as well as overcoming the negative this season. In the end I think the year off helped make me a better person.”

Following the fold of his TwoTwo Motorsports team in 2015, two-time champion Reed announced a return to his Factory Yamaha roots just yesterday with the formation of the Monster Energy/360fly/Chaparral/Yamaha Factory Racing.

“As one of the older guys up here [at the press conference], I’m able to learn and take away experiences throughout my career – including being a former team owner,” explained Reed. “I have no regrets and wouldn’t change anything about owning my own team, but it’s time to look to the future and I’m looking forward to this season.”

The fact that there were 13 riders on the stage, all either with a championship (450SX or 250SX) or a 450SX Class win to their credit, is a testament to the stacked field and incredible depth of talent that Monster Energy Supercross will showcase in 2016.

The entire 2016 Monster Energy Supercross Championship will air live on FOX Sports, including two races on the FOX broadcast channel. In addition, the authenticated FOX Sports Go app will live stream each race.

As a precursor to the live television, don’t forget to catch all of the pre-race coverage with Supercross Race Day Live presented by AMSOIL, which will stream on SupercrossLive.com from 12:50 p.m.- 4:30 p.m. local race time each Saturday during the season. Practice, qualifying, behind the scenes features, and key rider interviews will all be highlighted on the Supercross Race Day Live presented by AMSOIL webcast.