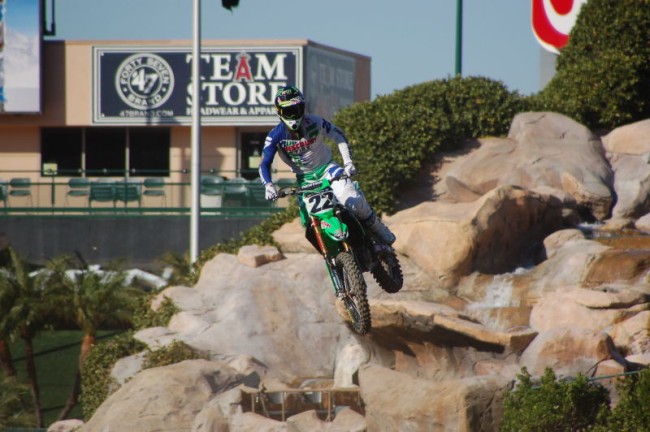 It has been the talk for a while, and last night Chad Reed officially confirmed that he will stop running his Two Two motorsports team with immediate effect. Reed however is not retiring! You can read the full, heartfelt, statement here:

OFFICIAL STATEMENT ON TWOTWO MOTORSPORTS:  Today we share the unfortunate news that our journey with TwoTwo Motorsports has ended. Five years ago, we built this race team from the ground up. With a team of the best guys in our industry, we created a successful winning team. I’ve always said, if your going to do something, do it right! We worked hard to compete at a level with the factory teams and to meet our goals of being championship contenders.

On the outside we were great, but on the inside the stress and cost of wearing both the team owner and the rider hats were taking a toll. I’m not someone who gives up, so when the tough times came I worked harder to push through them. 2014 was a tough year for the team, financially and mentally. My injury almost cost us the team, but I couldn’t handle the thought of losing everything we had worked for. 2015 has been a crazy year of everything going wrong. We had flashes of brilliance, but titles aren’t won with flashes. My “Mr. Consistent” status was gone and I was back on the “has-been” list in my own head. At this point in my career, I needed to make a choice of which hat I was going to wear moving forward: a team owner or rider. I can’t be both. I’ve been living and working at an unsustainable rate and I’ve emotionally, physically, and financially exhausted myself. I’m stubborn and haven’t wanted to let go. I don’t like the thought of giving up on anything. It’s taken a year of swimming against the current to finally realize I needed to make changes quickly. I’m lucky to have the support of my wife and family who have helped me see that I was not only losing my love of racing, but also heading for a breakdown. My family and my health come first.

TwoTwo Motorsports was a dream team. I thought it was my future, but I now know it was just a chapter. I’m not ready to retire. I read a quote somewhere that said “Don’t give up on something you can’t go a day without thinking about.” I’m not giving up on the goals of winning – just changing the way I do it.

To my wife, Ellie. Thank you for being my rock. You give me courage, love, and enthusiasm to do great things and continue to live my dreams. When everything feels like it’s falling apart, you are the glue that holds us together.

Even though my kids are too young to completely understand, I’m thankful to have raised them under the TwoTwo awning during their early years. It was a family friendly atmosphere and it made me very happy to be able to share my passion with them. They keep me young and teach me lessons beyond their realization.

A huge thanks to my TwoTwo team. You all took a chance joining the team and together we made history. The hardest part about this team closing is letting you go. We’ve built friendships and memories that can last a lifetime.

Thank you Josh Grant for joining us. Our time together got cut short. We are proud to have helped you achieve your best overall Supercross season. Though I cannot put a bike underneath him for the remaining Outdoors, I will continue to pay Josh and hope he can find a home to show off his talent soon.

To all the companies who have helped support TwoTwo Motorsports. Thank you for what you all brought to the table. Collectively we share the success and achievements made during our 5 years.  I’m thankful and proud to say that even when I’m down, my sponsors want to stick with me. Their continued support is testament that I have truly surrounded myself with the best people and companies: Discount Tire, Monster Energy, Fox, Shift, 360fly, Oakley, Factory Effex, and Stance.

I’m hoping that the fans of TwoTwo Motorsports will be supportive of my decision. I know I have the best fans around the world and I promise this isn’t the end for me. There is still a lot to figure out as we step forward into the unknown. The future is exciting and waiting to be written.