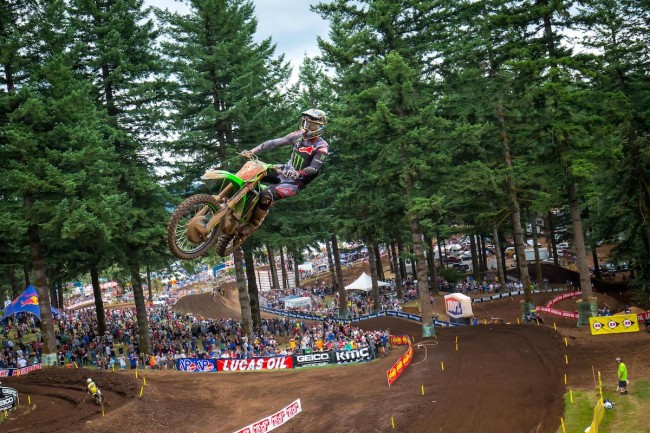 Never one to back away from an opinion, Chad Reed has given his view on Eli Tomac and Adam Cianciarulo not racing at Assen for team USA at the MXoN, despite both originally saying they would be up for racing it.

Reed doesn’t believe the reason is that Kawasaki didn’t want to go but that the riders, if they really wanted too, could have went by forcing the issue.

Reed clearly feels it is an excuse for the points leaders in the 450 and 250 class to hide behind – but Pulp MX journalist Steve Matthes understands their reasoning, believing racing at the MEC doesn’t help the chance of victory in the MXoN (even though Tomac won it last year after Red Bud).

Matthes had earlier tweeted in defence of the riders, saying: “ It’s the not the riders, takes a lot of work for everyone on the team, doesn’t line-up with doing well at MEC, which is important for their title sponsor. I get it”.

But then Reed responded:“Oh BS! If those two riders wanted to actually race it, no way team stops them. After last year’s experience why the hell would Eli wanna go ‍♂️. But 100% if they really wanna race they can.”

Matthes then replied to Reed: “That’s the million dollar question right? Mitch told me he was never asked about AC, so it’s a great out for the riders. “ Couldn’t go, wasn’t asked.” AKA Kawk told Roger they were out.”

Reed, once again, wasn’t buying it and believes it would be a great way for Cianciarulo to end his 250 career. “ Mitch always supports the event. Personally think it’s a great way to sign off on a lites career. One day he’ll see how cool it coulda been…”

Unfortunately, despite the advantage the USA have at that race since they don’t have to race against team Europe, the MXoN seems to have become more of a hassle than reward to the US teams, riders and even the media, especially with the MEC suddenly becoming more important, highlighting just how much indoor racing takes precedent over the outdoors in the States.

But with a US motocross champ and former GP winner in Zach Osborne, a supercross champ in Jason Anderson and a 250 title contender in Justin Cooper – America’s predicted team is still very, very strong heading to Holland!