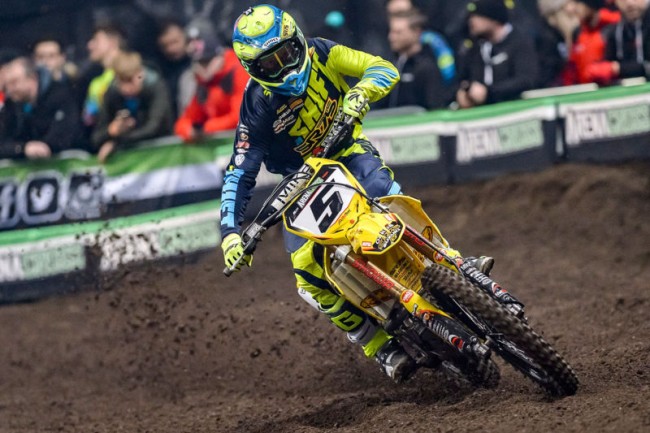 SR75 World Team Suzuki riders Thomas Ramette and Cyrille Coulon came out fighting at the opening round of the 2017 Arenacross Tour in Manchester Arena on Saturday but what promised to be a great night for the French pair ended in disappointment.
Running 1-2 in qualification, they then swept all the heat races to head into the Main Event with first and second gate picks.

Thomas, who is aiming to make it three AX Pro titles in a row, gated well but after being forced to turn tight ended up crashing into the FMX ramp. With his bike tangled in the ramp and his bars jammed in his boot – which had to be removed to release him – it was game over.

Cyrille got caught up in the carnage but stayed upright and began to charge through the pack, eventually making a clean pass for the lead. In the next corner he had a coming together with Adam Chatfield which bent his gear shifter into the engine cases leaving him stuck in first gear which made jumping impossible.

It was a challenging start to the seven-round series which puts SR75 on the back foot in the defence of its Team and Pro AX titles but both
riders have shown time and time again their
refusal to roll over.

Thomas Ramette – DNF
“Tonight was obviously tough to take as I felt okay on track and I was able to ride well within myself without pushing too hard as I loosened up. The heats went well and I was looking forward to finding a good rhythm in the Main and making a race with Cyrille who was on fire tonight. We work hard in this team and everything is so perfect with our bikes and all aspects. I have a mountain to climb in the championship and nothing to lose – it’s a zero-pressure situation.”

Cyrille Coulon – 9th
“I feel good all day. My bike is awesome and I have big fun. It was cool to win my heats. In the final I made a good race for the win and I made a good pass for the lead when I got hit and my bike was damaged. It is difficult but I race harder now every race and make a great show for fans, sponsors and team.”

Geoff Walker – Team Principal
“The guys and team were incredible tonight. I think their speed and power is there for all to see and we will continue to work hard to make our results and continue our journey while having a great time racing.
“Racing is meant to be tough but this is what we live for and we could not have given any more on the night. When our guys give everything they have I can’t ask for any more. Things just turn out a certain way sometimes and we will continue to work and race with smiles on our faces. I would like to thank everyone involved in SR75 World Team Suzuki.
“I also want to give a personal shout out to our supported Rookie/Lites rider Luke Oldfield. Suzuki GB came up with a little support for us help to a local rider who would appreciate an
opportunity to race AX. Luke stepped up and learned with every second on track in his very first indoor experience.”