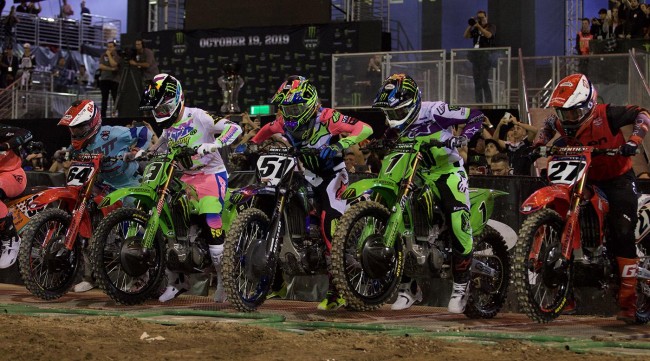 Tom Jacobs spoke to some leading names in Vegas to get their thoughts on the radio communication system available for riders at the Monster Cup in October.

It’s safe to say opinion was divided on whether it was a good idea for riders and their team being able to communicate with other during the races!

Roger DeCoster: “I’m not for it. I think it can be used negatively, there are some positive side, if someone crashes in the track, you can warm you rider. But it’s one more thing to take care of but it’s an expense also and can be used to block other riders. I think the main reason the promoters want to go that route is they want to do away with the mechanics on the track, they don’t like the mechanics on the track.”

Benny Bloss: “I thought it was awesome. My team manager was up in the mangers tower talking to me. It was really cool in qualifying because usually I would pull in and figure out where I’m at and what I end to work on, stuff like that. I never had to pull in all day, it was awesome he told me any information I need to know, any lines any jumps that I needed to hit or what position I was in. Then also, if there was a downed rider which was huge, there is a lot of blind jumps on the tracks. I think that will help the safety part of it.”

Tim Gajser: “If we were in the car yes, but when you are racing there are so many things going on, your focus has to be 100% and when you speak with someone else your focus goes to something else and then you could make a mistake. I don’t know, it’s tough to say, I have never tried.”

Chad Reed: “Actually I really like it, in general it was quite nice, I think for safety it’s much safer and I think we need that communication for 2020, I really do. I think it’s a safety advantage, I hope next year they let us do it in supercross.”