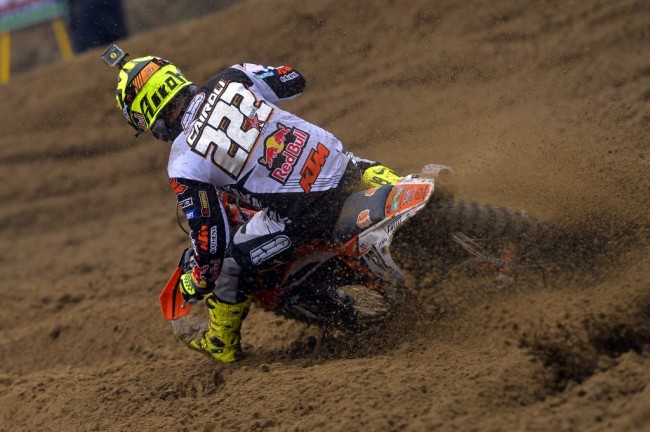 So, Antonio Cairoli has already clinched his first title of the season! The defending world champion rode a smart and steady series to clinch the three round Italian championship despite admitting he still isn’t at 100%. Indeed, Cairoli backed off in a couple of races to make just sure he didn’t crash and jeopardize his GP aspirations. But, as usual, the Italian did what he had to do to win the championship.

Last weekend though, it looked like his teammate Ken Dycker would win the first moto until the last lap, when machine failure gifted Cairoli the victory. It was the best De Dycker has looked since 2013 and hopefully the big Belgian is now ready to go for the GPs.

Jeremy Van Horebeek finished third in race one but was in the lead battle until he lost his goggles. He said he would go for the win in race two and the Yamaha man did just that! Van Horebeek led the whole race and despite mid-race pressure from Cairoli and Yamaha teammate Febvre, Van Horebeek eventually won with five seconds to spare. The ride will have boosted the Belgian’s confidence even more as he now gets ready for Qatar. Van Horebeek really believes he can win the title this year, and the way he is riding right now, and not pushing 100% yet, you have to believe he will be in the mix!

Romain Febvre was flying last weekend. And in the last couple of weeks has served notice that he will be one to watch this year. He fears no-one and passed Cairoli back in race two and even went after his teammate. Bearing in mind this was sand and not his favoured hard pack, it seems Febvre is for real on the 450 in any conditions and actually looks less likely to crash than he did on the 250. Qatar should suit the former Supermoto champ perfectly too!

Tommy Searle continues to impress on the 350, he claims he loves the team and the bike and it is showing. Searle had Cairoli in his sights for most of the second race , and on sand track that is something Searle has never really been able to do before. Searle finished a solid fourth, his sand skills are improving,  and his confidence is getting back to where it used to be.

Max Nagl and Bobreyshev came together at the start of race one and got their bikes stuck for almost the entire race, they had to take the Husky’s rear wheel off to get them separated! Nagl had to ride his practice bike in race two and rode to a steady fifth. Bobby meanwhile hasn’t shown much form so far in pre-season but the Russian just needs to remain healthy and avoid crashes and show his speed form Qatar onwards!

MX2 lacked the start power but it was Nick Kouwenberg who stunned everyone by taking the win ahead of Tim Gajser who won the championship! Gajser didn’t want to take any risks in the sand but Kouwenberg was a revelation on the J-Tech Honda and if he is as good on the hard pack as he is in the sand could pop in a few good results this season!

Over at Valence in France the rain never stopped and turned the event into a mud bath! But it was Clement Desalle who took a double victory with Boog and Simpson rounding off the podium. Kevin Strijbos and Gautier Paulin were fourth and fifth overall with both admitting they didn’t want to risk anything coming through the field in those conditions.

Tyla Rattray made his 2015 debut but the South African didn’t impress, and was outside the top ten in qualifying and the first race and didn’t take part in race two. He will be hoping for much better in Qatar!

In MX2 it was Pauls Jonass who won the overall and the Latvian has really made his presence felt this pre-season. Of course, being a mud race it is hard to gauge but Jonass appears to have really upped his level over the winter and has won two pre-season races. His confidence will be very high going into Qatar!