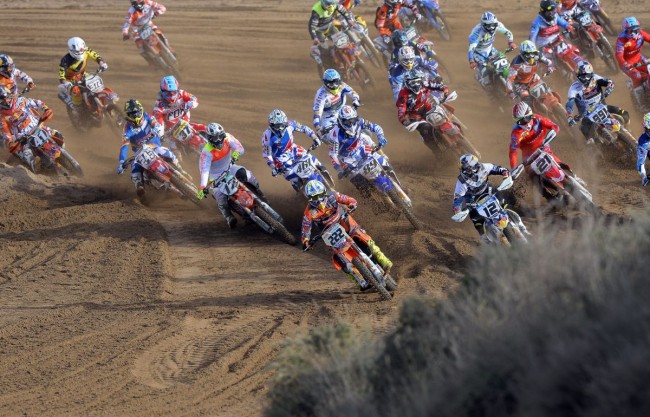 Antonio Cairoli and Pauls Jonass made it a KTM day at the first round of the Italian championship winning their classes in style in the deep sand of Sardinia.

Cairoli had a bar to bar battle with Gautier Paulin to flag in race one with the HRC Honda man pipping Cairoli to win on his debut ride. But in race two Cairoli set the record straight with devastating first lap that saw the defending World Champion put 4 seconds on his rivals immediately.

Cairoli was hopping, skipping and jumping across the sandy circuit, reminding everyone that Ryan Villopoto isn’t the only guy racing MXGP next season!

But Gautier Paulin can also leave happy. A win in the first moto backed up by second in race two after gating just outside the top five is a good return for the opening race of the season. Paulin looked very comfortable on the Honda and proved he has the sand set up dialled in.

The big surprise of the first moto was David Philippaerts, the elder statesman in MXGP passed both Cairoli and Paulin in the first moto and had a two second lead when his silencer fell off. We aren’t sure what the 2008 World Champ did over the winter but if he can maintain that pace during the GP season, you can add yet another top five contender into the mix!

Jeremy Van Horebeek was satisfied with his speed too but a crash in race two meant he finished lower than his speed suggested he belongs.  His teammate Romain Febvre had two top six finishes and had the perfect solid start to his 450 career.

Tommy Searle put his name back on the map of contenders after going pole in qualifying, a bad start limited his race one potential, but third place after a crash in race two shows that Searle is getting back to rider that challenged for the MX2 title.

In MX2 Pauls Jonass showed that he is for real and KTM have made a pretty shrewd signing. After dominating both MX2 motos  (with 7th in the Superfinal) the young Latvian still wasn’t satisfied: “Pretty happy with my result this weekend but not satisfied with my riding,” admitted the teenager.

Jonass might just set the cat amongst the pigeons this season – he is even better on hard pack!

Tim Gajser led moto one early only to get passed by Jonass then crash back to third. Brylakov then put Gajser down to fourth in what was not the best of races for Tim and left him knowing he needs to work a bit more on his sand skills.

Alex Tonkov and Jen Getteman had to come through the field but also showed some good speed and Getteman in particular might surprise some people in 2015.

Of course it’s hard to say just what it all means for the GPs, not everyone would have been pushing 100%  and a lot of GP regulars weren’t there but Paulin and Cairoli in particular showed that they haven’t got any slower in the winter and are ready to attack even in pre-season.

For a guy like Nathan Watson, hovering around the top ten all day, his confidence will have soared. But if you are his teammate, Todd Waters, you might just be panicking a little since the Aussie had predicted he would be a top five regular in MXGP this season but couldn’t break into the top ten in the Italian sand. Waters thought claimed he just hadn’t ridden much sand after riding hardpack in Australia, maybe we will see the best of Waters at round 2.

His teammate Max Nagl starts well in both races to show he had adapted fine to the Husky but arm pump meant he faded badly in both motos, but to be getting good starts and have the speed means Nagl will be satisfied with his first race of the year as long as the arm pump issue can be sorted.

Pauls Jonass might have gained the most confidence however after beating the rider that won the last MX2 moto of the 2014 MX2 GP season. After a raft of health problems in 2014, maybe it is only this season with KTM behind him that we see the potential of the rider that dominated the 2013 EMX125 class.

Round two is next weekend at the former GP venue of Castiglione De Lago, a more regular hard pack track with plenty of jumps should give is another partial preview of the 2015 GP season . With rumours suggesting that Ryan Villopoto might turn up too, it could be quite the show!