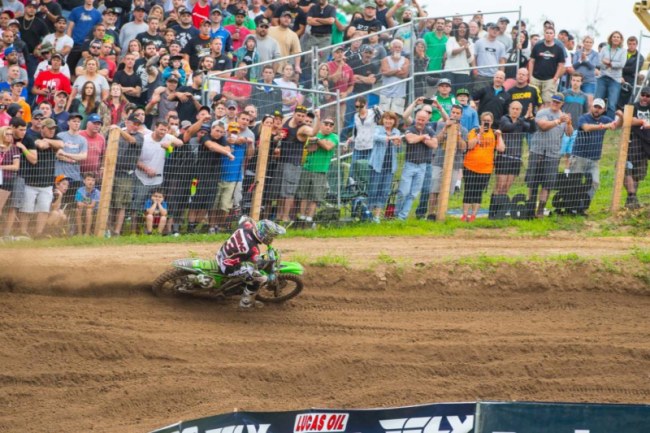 ELi Tomac loves the Southwick sand and took pole position over 2 seconds from Blake Baggett who is riding with a thumb injury.

Eli Tomac cruised to victory in race one after passing Blake Baggett for the lead. Cooper Webb finished third with Marvin Musquin coming from a crash on lap one to fourth. Weston Peick and Justin Barcia were both in the top five but DNFd due to mechanicals.

Eli Tomac took the win in race two after a brief battle with Marvin Musquin. But it ended badly for the KTM man when a huge crash took the Frenchman out of second place and the race. Blake Baggett inherited the runner-up spot going 2-2 for second overall and limiting the damage despite a sore thumb.

Dean Wilson took third in race two to give him third overall after Cooper Webb crashed out of third and finished sixth, losing a podium to Wilson in a tie-break.

Adam Cianciarulo edged Dylan Ferrandis and Zach Osborne for an impressive pole position in the 250 and admitted he has usually struggling in qualifying at Southwick before today!

Dylan Ferrandis took the win in the sand but had to pass race leader Alex Martin twice after crashing the first time he took the lead from Martin. Osborne took second with Alex holding off his brother Jeremy for third. Aaron Plessinger crashed out while running second with what appeared to be an injured shoulder.

It was roles reversed in race two with Zach Osborne taking the win from Dylan Ferrandis giving Zach the overall win in the tie-break from the Frenchman. Ferrandis was chasing Osborne but went down and settled for second as the rain came.

Alex Martin had another good ride for third and took third overall.