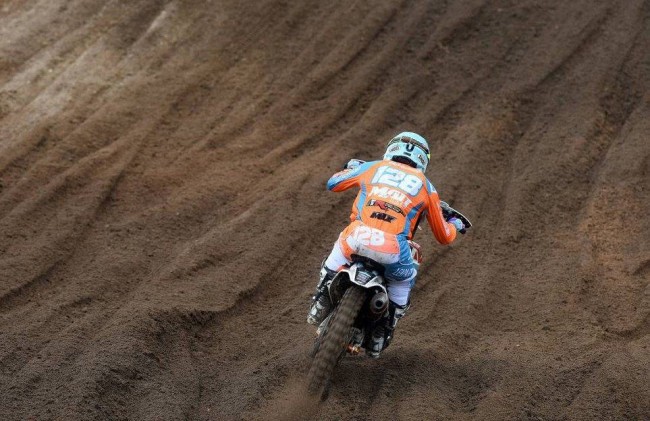 Ivo Monticelli had a good day as he made his return to racing after being on the injury list. The Marchetti KTM rider finished second in the first moto but less than two seconds behind race winner, Michele Cervellin. Rubini was also in the battle as he finished third but only two seconds behind.

Simone Furlotti and Morgan Lesiardo who are locked in a battle for the EMX250 title had a battle but Furlotti just about came home in fourth.

Monticelli went one better in moto two as he grabbed the win ahead of Morgan Lesiardo who had a better moto on his Factory Kawasaki. Cervellin who won the first moto only managed third in the second moto.

Davide Guarneri who made a return to racing finished seventh and fifth in the moto’s which isn’t bad considering he’s been away from motocross from the last couple of years as he has been competing in Enduro.

In the MX1 class, Alessandro Lupino yet again dominated as he won both moto’s on the day. Jeffrey Dewulf rode well to secure second overall ahead of Stefano Pezutto.

In the Superfinal it was Jeffrey Dewulf who brought home the win. EMX250 championship leader, Simone Furlotti was leading before Dewulf found his way to the front.

Furlotti kept it close as it was less than two seconds at the chequered flag. Alessandro Lupino could only managed fifth in the superfinal as he couldn’t get around David Philippaerts who round great for fourth.

UPDATE** Jeffrey Dewulf picked up a ten spot penalty for jumping a waved yellow flag. So, that means he drops to eleventh with Furlotti taking the win!

Jeffrey isn’t happy with the decision to dock him ten places as he claims Furlotti also jumped on the same lap as him:

“The first lap we passed, the guy holding his yellow flag was not in a good spot. We jumped completely on the right side every single lap and there was nobody there. The guy that should have been there was running towards the injured rider to help or wave to us in front of him. So furlotti and myself jumped that lap but nobody got in danger or got any advantage from doing this.