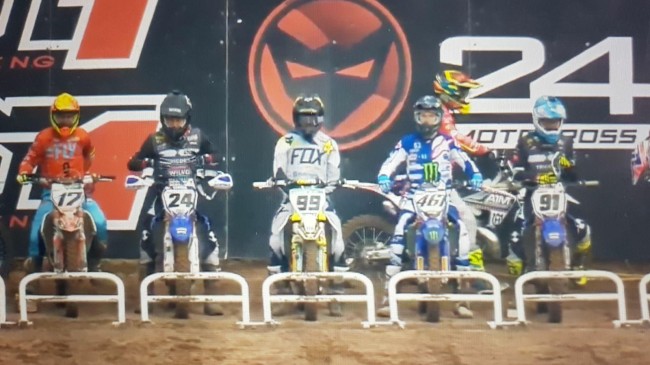 When the gate dropped for the MX2 moto it was rookie, Mikkel Haarup who grabbed the hole shot from fast starting Gianluca Facchetti and Pauls Jonass. It didn’t take Jonass long to get into second but then him and Haarup crashed on the same corner! Vlaanderen found himself out in front but then Hunter Lawrence moved his way into the lead. Jonass was flying through the field after his crash and got into second but just didn’t have enough for Lawrence after the paid battled. Brit, Ben Watson was fourth but then crashed on the last lap.

In the MX1 race, there was drama around the first corner after Jeffrey Herlings crashed and then got ran over which left him out of the race. Cairoli grabbed the holeshot and never looked back, he looked really good out in front. Max Anstie rode well to come home in second with Van Horebeek passing Paulin over the finish line for third.

Antonio Cairoli once again got the holeshot in the Superfinal ahead of Van Horebeek. Anstie made a move around the Belgian and Febvre quickly followed. Cairoli looked to have things under control at the front but at the half way mark, Anstie made his move for the lead. Cairoli then came under pressure from Febvre but that’s when the Italian fought back. The nine times world champ put the hammer down and got into the lead a lap later again and never looked back.

Pauls Jonass was the first MX2 rider as he came home in sixth beating plenty of top MXGP riders. Bas Vaessen in tenth was the second MX2 rider with Maxime Renaux third in thirteenth, he was very impressive on his return to racing!

In the 125cc it was Emilio Scuteri who won the first moto on the day. The tables were turned in the second moto as Mattia Guadagnini passed his fellow country man, Scuteri to take the win! Rick Elzinga had a solid day finishing third in both the moto’s to get himself on the podium.