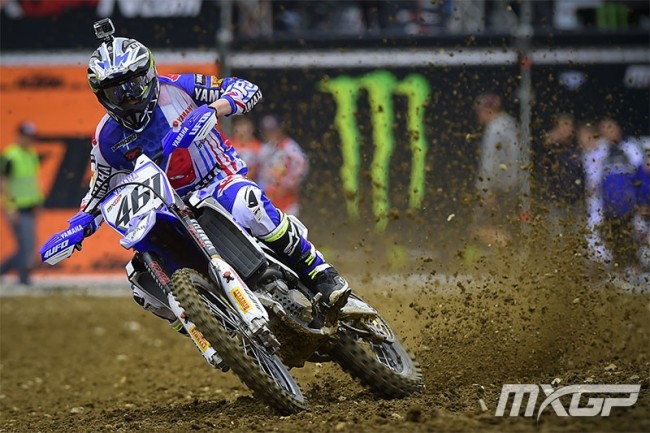 Romain Febvre stormed to an unforgettable first ever MXGP win in front of his brilliantly loud home crowd by going 2-1 on the day.

Antonio Cairoli won race one but had a dismal start in race two only  and pulled through to seventh. But he was still third overall and gained two points on Max Nagl in the championship. Nagl went 6-2 and now has a 19 point lead over Cairoli.

Evgeny Bobreyshev was second overall for his first podium of the season and dedicated it to the three members of the HRC hospitality unit who are fighting for their lives after getting carbon monoxide poisoning on Thursday in the truck.

In MX2 Jeffrey Herlings won a blistering battle with Valentin Guillod in race one in what proved the race of the day. In race two Herlings held of a determined Tim Gajser to take his first GP win since the Dutch GP a month ago.

Guilled crashed hard with Graulus over a jump on lap one on race two and came fro way back tp 13th for fifth overall. But unsurprisingly it was Jordi Tixier who took another two third places to make the podium once again (third) to the delight of the French crowd.

You can see the full results below: