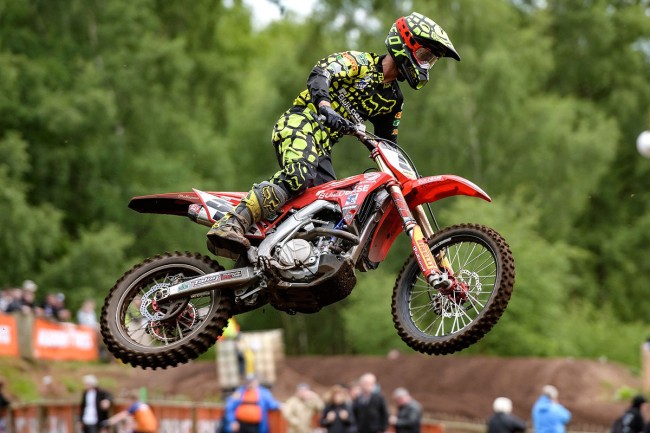 Darian Sanayei set the pace during the MX2 Qualifying session and he has the first gate pick for the main races. Brad Todd and Jake Millward put in good laps to be second and third quickest. Ben Watson and Martin Barr only managed the seventh and eighth quickest lap times.

The first moto was going well for Sanayei as he was holding the lead. However, Ben Watson was on a charge behind him and after passing his team mate Josiah Natzke, he was able to close the gap to the American. Sanayei then made a mistake and Watson took full advantage. Barr made a move on Eccles on the last lap to finish in fourth meaning he loses seven points to Watson, there’s now a good chance that he will clinch the title after the second moto. Alexander Brown deserves a mention for putting in a very good ride to come home in sixth position.

Darian Sanayei won the second moto of the day and the overall with that but that won’t worry Ben Watson. The Hitachi KTM UK rider finished second and is the new MX2 British Championship – congratulations to him!

In MX1, it was Harri Kullas who set the pace ahead of Gert Krestinov. Nathan Watson who is now an Enduro rider is back racing a motocross event this weekend and he set the third quickest time ahead of championship leader, Graeme Irwin.

Can anyone stop Graeme Irwin? He won the first moto of the day and that’s now seven British Championship moto’s in a row the Buildbase Honda rider has won! With Krestinov down in seventh place it’s very likely he will clinch the title at the end of today. Dan Thornhill rode a very good race by finishing in fourth on his Cabs Screens Husqvarna.

As expected, Greaeme Irwin won the second moto too and clinches the British Championship title. After a fourteen year wait since Crockard last won his british title, Ireland finally has another British Champion again!

Nathan Watson got a much better start in the second moto and came home in an impressive third. Edmonds was having a superb moto in third with only five mins to go but he made a mistake which pushed him down to seventh with is still a good result.

Check out the results below: