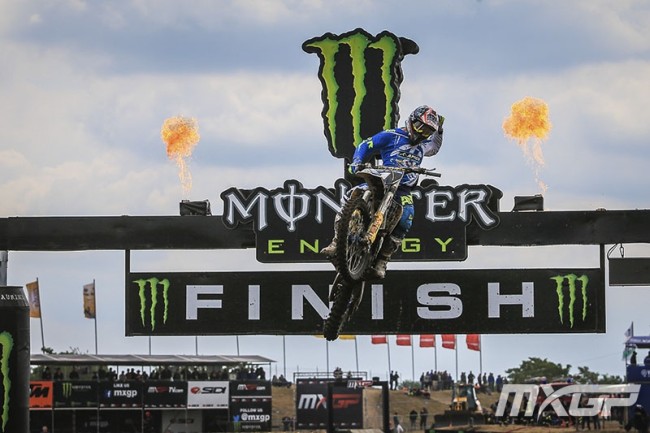 MX2 race one – Jake Millward took the holeshot from pole-man Bryan Mackenzie before Mackenzie took the lead after a couple of laps. Martin Barr went from fifth to third on lap five passing Clarke and Davidson, only for Clarke to get Barr back and go third as they both set their sights on Millward in second.

Clarke then got himself into second with Barr following Clarke’s wheel-tracks moved straight into third. Both then set about trying to catch Mackenzie who had a two second lead with Clarke going to work immediately catching and passing Mackenzie a lap later.

Clarke started to pull away leaving Mackenzie to fend off Barr, with Barr finally making his move on MacKenzie on lap 11. Barr settled for second as Clarke took his first race win of the year. Championship leader James Dunn pulled through to fifth after starting at the back of the top ten.

MX2 race two Steven Clarke fresh from his win in race one took the holeshot in race two from Bryan Mackenzie as Mel Pocock rode strong on his comeback and battled with Sterry for third in the opening laps.

Martin Barr moved up to fourth passing Sterry and then on Pocock to go third , Barr then continued his charge and got Mackenzie to go second on lap six.

Barr was 5 seconds behind leader Clarke as they traded lap times with Barr unable to make a dent into the lead until the last few laps, when with three laps to go, Barr put the afterburners on and got the gap down to 2.5 seconds only for Barr to go down and drop back to fourth. This gave Clarke the win as James Dunn took advantage of Barr’s crash to get into third then passed Mackenzie on the last lap to take second and take the lead in the championship alongside Steven Clarke going into round three, both have 70 points with Barr one point back in third.

MX1 race one – Tommy Searle went down in turn one after being taken wide by Kristian Whatley who took the holeshot. Jake Nicholls had a bike problem on lap one to move Simpson up to third. Simpson got by Leok and then Whatley to move into the lead all within on impressive lap!

Graeme Irwin was fourth and set about putting pressure on Leok for third and the Estonian kept Whatley under pressure for second. Whatley began to chip away at Simpson’s lead halfway through until Simpson started to pick the pace up to keep Whatley at bay.

It was a three way battle for second in the final couple of laps with Whatley, Leok and Irwin. Leok got into second as the Buildbase Hondas went at it for third with Irwin getting the advantage only for Whatley to strike right back but Irwin made the move again on the last lap to take third. Tommy Searle came from last all the way back up to ninth.

MX1 moto two Tommy Searle took the holeshot from Nicholls and Lenoir as Simpson came from sixth up to third in the opening laps. Simpson inched his way to the back wheel of Nicholls and eventually made the pass despite Nicholls attempts to keep the Scot at bay.

2015 MX2 champ Steven Lenoir rode to a fine fourth with Graeme Irwin a steady fifth but no-one could get close to Searle out front as he controlled the race from Simpson.