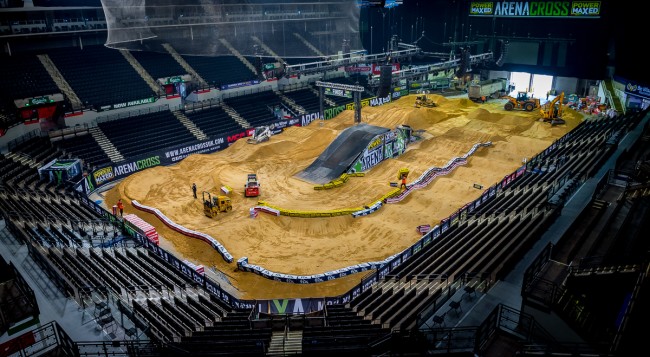 It was the Aussie, Dan Reardon who saved the best to last as he won the final round of the Arenacross UK series. It was Reardon’s first win of the series and he finally proved that with a good start he’s capable of winning  on his I-Fly JK Yamaha, hopefully we see him back in 2019!

Coming into the weekend only three points separated Soubeyras and Ramette in the race for the championship. Even though Ramette got the better of Soubeyras in the main event, it’s Soubeyras who walks away as champion this year! Soubeyras put in a quicker time than Ramette during the hot lap which gave him an extra point, talk about close!

Fabien Izoird rode well for fourth with Adam Chatfield ending up as the best Brit in fifth ahead of Charles Le Francois.

In the Pro Lites class, Joe Clayton won the first moto of the day ahead of Jason Meara and Chris Bayliss.

The second pro lites main event didn’t last long as it was red flagged after the front two riders only completed two laps whilst the others only did a lap. Instead of restarting the race they decided that it would stand as a result leaving Chris Bayliss to take the win from Joe Clayton, George Clarke and Jason Meara.