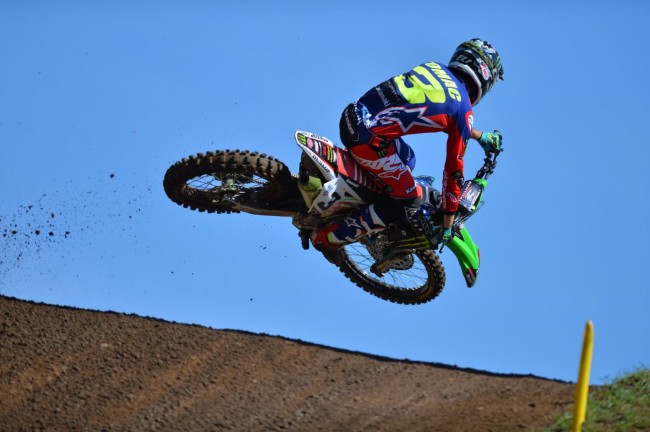 In the first 250 moto of the day, Aaron Plessinger got the holeshot and never looked back as he dominated moto one. Cianciarulo rode well to make a move on Ferrandis for second. Zach Osborne was outside the top twenty on the first lap but rode the wheels of his Husqvarna to get back up to fourth.

After finishing down in seventh in the first moto, Joey Savatgy got the holeshot in the second moto. Rj Hampshire made a move on him but Joey responded, retook the lead and went onto win.

It was all going on behind Savagy though as there was a super four rider battle. It looked like Cianciarulo would win the overall but then Dylan Ferrandis passed him on the last lap which meant Savagty took the overall. Remarkable, Cianciarulo ended up fourth overall and off the podium after the last lap a pass – every point really does make a difference!

Marvin Musquin grabbed the holeshot in the first 450 moto with Eli Tomac outside the top five. However, it didn’t take the Kawasaki rider to get into second and put the French rider under pressure. The pair even touched at one stage but then Musquin pulled away to take the win! Cole Seely rode well to come home in third with Blake Baggett down in seventh.

Martin Davalos grabbed the holeshot in the second 450cc moto of the day. Musquin and Tomac were both outside the top five but after around ten minutes they were running 1-2. Musquin had all the answers for Tomac this weekend and took the double win for fifty championship points.  Davalos rode well to come home in third and secure third overall just edging out Cole Seely.