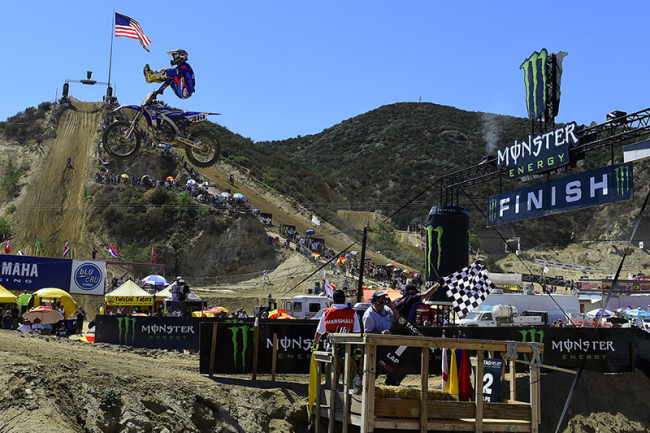 GLEN HELEN (USA), 20 September 2015 – The signature hills of Glen Helen made for an exciting and successful end to the most epic season of motocross ever, the 2015 FIM Motocross World Championship. Stifling hot temperatures saw Yamaha Factory Racing Yamalube’s Romain Febvre rise to yet another challenge for his eighth MXGP round overall while California’s own Jessy Nelson took his Troy Lee Designs Lucas Oil Red Bull KTM to a double race victory for the MX2 Grand Prix win on his debut appearance.

It was also a memorable weekend for Honda Gariboldi’s Tim Gajser here at the eighteenth and final round of the FIM Motocross World Championship with the Slovenian winning the season long battle in MX2 to be crowned world champion.

Yamaha Factory Racing Yamalube’s Romain Febvre proved why he is the 2015 FIM Motocross World Champion once again this weekend when he won on a completely unfamiliar track in the fierce heat of California. Febvre rebounded from mediocre starts in both races and charged to the front for a hard fought victory in race one and second place in race two after a small crash spoiled his shot at another perfect weekend. With those scores Febvre, who was already crowned world champion at round 16 in Assen, The Netherlands, added another Grand Prix victory to his statistics and extended his points margin to 143 over fellow Frenchman Team HRC’s Gautier Paulin, who is officially the 2015 vice FIM Motocross World Champion. Paulin’s Team HRC teammate Evgeny Bobryshev is the 2015 MXGP bronze medalist.

Monster Energy Kawasaki’s Josh Grant has cut so many laps around here he could almost ride with his eyes closed. Even though the track was prepared differently to what it usually is and it chopped up slightly different due to the European style of riding, the Californian native had his lines down and rode crazy fast this weekend to lock up second overall with a race win in the final moto. The legend Ryan Villopoto said during the commentary, “Josh is riding great at the moment, he’s on rails”.

Yamalube Star Racing Yamaha’s Cooper Webb put in a very impressive performance this weekend. The young American, fresh off of the 250cc, wasn’t afraid to mix it with the big boys as he went bar-to-bar with both Febvre and Grant on his way to third overall on his MXGP debut, “overall I’m really happy, for me it was an awesome experience and I am looking forward to race MXoN next week.”

It was awesome to have Red Bull KTM Factory Racing’s Antonio Cairoli back on the gate, although he didn’t finish the second race after his hand came off the bars when he over cooked a jump, which may have flared up his recent injury. So, it was up to fellow Red Bull KTM Factory Racing rider Dean Wilson to fly the flag for the orange army, which he did with a fourth overall finish despite coming from miles back in both races.

Rockstar Energy Husqvarna Factory Racing’s Jason Anderson was running a sweet pace all weekend but found himself in trouble a couple of times which left him finishing in tenth overall.

The Californian sun shone on Troy Lee Designs Lucas Oil Red Bull KTM’s Jessy Nelson today as he dealt to everyone racing the Monster Energy MX2 grand prix of the USA with an impressive double moto win to claim his first ever Grand Prix victory. As an award for the dominance of his home Grand Prix, the American was gifted the Marty Moates Cup which is a symbolic prize that officially dubs him a top American rider.

The day couldn’t get much better for the team at Troy Lee Designs Lucas Oil Red Bull KTM as Shane McElrath, yesterday’s top qualifier, put in two more blistering fast rides for a second and a third place finish for second overall.

Third place this weekend went to Standing Construct Yamaha Yamalube’s Valentin Guillod who used that same aggression and speed we started to expect from after his Grand Prix wins in Spain and Great Britain earlier in the year to bounce back from a mediocre start in race one for fifth, and an impressive third in race two. A teary eyed Guillod expressed how proud he is of what he has achieved this year even though he has faced a fair bit of adversity over the few rounds leading up to the grand finale which took place today. Nevertheless, the Swiss rider achieved what he wanted to this weekend with his podium finish and will make the leap to MXGP next year with a fourth place finish in the FIM Motocross MX2 World Championship on his resume.

It was one of the hardest fought MX2 world titles ever, but there was no one more deserving of the 2015 FIM Motocross MX2 World Championship gold plate than Honda Gariboldi’s Tim Gajser. Although it wasn’t the easiest of seasons with the new world champion saying “this season was tough, there were many ups and downs, it started so bad” the Slovenian took home fourth today, which was enough for him to wrap up the ultimate prize.

Monster Energy DRT Kawasaki’s Max Anstie also had a bit of a rough day but did enough to round out the top five and go home as the world number three.

Meanwhile Red Bull KTM Factory Racing’s Pauls Jonass had his wings clipped after literally trying to reach for the stars last weekend in Mexico. The Latvian was only ninth overall today but nonetheless he has had an outstanding season, one that exceeded all expectation and although being the world champion would have been the cherry on the pie, going home as the vice FIM Motocross MX2 World Champion is an achievement he can be proud of.

As for the duo also representing the Stars and Stripes Monster Energy Kawasaki’s Chris Allredge and Thomas Covington had their ups and downs. For Covington, the most recent MX2 round winner, he was dirt sampling in both races while Allredge put in an impressive ride in race one for second but ended up in a heap with Covington in race two which saw them both finish outside of the top ten. Despite Alldrege’s bad luck in race two, he still managed to go away from his home grand prix with sixth overall.