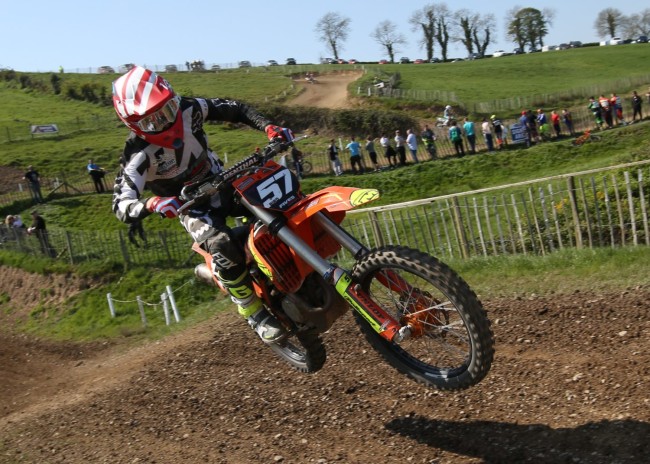 Richard Bird rode both MX2 and MX1 classes at a slick Seaforde and was five minutes away from winning all six motos until a crash cost him his perfect day!

It was the only mistake a dominant Bird made all day, the multi-time champ currently has the perfect combination of experience, fitness and speed compared to his rivals more often than not.

Bird’s mistake the final MX1 moto opened the door for a very fast Sean Devlin to win his first Grade A race and it was well deserved with Devlin determined to keep the pressure on Bird in the final moto on his Risk Racing Honda.

Devlin was drafted into the team to replace the injured Robert Hamilton and his performances since getting on the red machine have proven that decision to be a worthy one.

Jordan Scott rode well all day and was Bird’s closest challenger in the first two motos but the versatile rider got a flat front tyre on lap one in race three while leading and went down hard ending his hopes of victory and dropping him to sixth overall. Craig Browne rode superbly all day to get on the podium in third.

Christopher Cully won Grade B edging Josh McCorkhill, who’s winning ambitions weren’t helped when he got taken out in race one. Mark Dynes was third.

In MX2 James Mackrel couldn’t quite get on terms with Richard Bird, the youthful exuberance of Mackrel meant little mistakes on the slick surface lost him valuable yards to the consistent Bird. But Mackrel showed a lot of speed and took over the points lead after poor Jordon Keogh clipped the back wheel of Scott Hamilton in moto two and went down hard with what appeared to be a shoulder injury.

Keogh bravely tried to ride the last few corners to finish the moto but was grimacing in pain and immediately went to the hospital to get checked out.

Scott Hamilton got excellent starts and rode well in all three motos for third on the podium.

Stephen Mullaly was fourth overall and was ringing the neck off his YZ125 showing that with a good rider on board the two-stroke can still be pretty competitive!

Grade B victory went to Calium Meara who won all three motos and even a crash couldn’t prevent him taking a win! Meara is battling for the top five overall places with Grade riders and is in a league of his own in Grade B. Rhys Graham and Paul Laverty rounded out the top three.

In Grade C MX2 it was Adam Clifford taking the win.