Race Report: Tomac’s back on form! 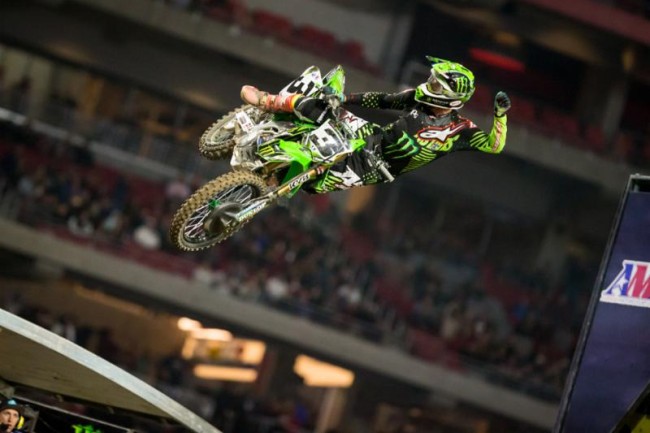 GLENDALE, Ariz. (January 28, 2017) – In front of a crowd of 54,274 fans inside University of Phoenix Stadium, Monster Energy Supercross made its first trip outside the state of California on Saturday night for the fourth round of the 2017 season. Following an uncharacteristically slow start to the season, Monster Energy Kawasaki’s Eli Tomac was dominant in the 450SX Class Main Event, grabbing his first victory of the season with a wire-to-wire effort. In the Western Regional 250SX Class, Monster Energy/Pro Circuit/Kawasaki’s Justin Hill made it back-to-back wins following a late-race pass on championship leader Shane McElrath.

With a start straight inside University of Phoenix that spanned 384 feet, the 450SX Class field roared into the first corner to kick off the Main Event at exceptional speed. After getting the edge, Tomac was able to navigate his way through the first turn with the lead and the SupercrossLive.com Holeshot Award. Behind him Smartop/MotoConcepts Racing Honda’s Justin Brayton slotted into second, while Team Red Bull KTM Factory Racing’s Ryan Dungey, the reigning series champion, and Team Honda HRC’s Cole Seely battled for third, with Seely getting the upper hand.

With no one to challenge him, Tomac checked out on the field almost immediately and found himself multiple seconds ahead within the first couple laps. That left an intense battle for the podium to unfold behind him. Seely was able to apply heavy pressure on Brayton and made the pass for second on Lap 1. Just a couple laps later Dungey passed Brayton for third, and set his sights on Seely for second. Behind them veteran Chad Reed was mounting a run to the front aboard his Monster Energy/Yamalube/Chaparral/Yamaha Financial Services/Yamaha Factory Racing machine, improving from a sixth-place start to slot in behind Dungey in fourth on Lap 4.

To the delight of the crowd, Reed made a run on Dungey for third and took the spot just prior to the finish line to complete Lap 7. However, the champion responded and fought his way back around Reed to start the next lap and pulled away slightly. Dungey soon found himself on Seely’s rear fender for second and the pair began a spirited battle for the spot. Dungey made the pass on Lap 10, but Seely battled back, regaining the position. This battle allowed Reed to close in from fourth, and the Australian rider took full advantage of the fierce fight in front of him to pick off both Dungey and Seely at once and move into second. Dungey then solidified his pass on Seely for third and set chase to Reed.

The field stretched out in the late stages of the Main Event, with Tomac holding a lead upwards of 20 seconds on the field. The Colorado native took the checkered flag for his fifth career win, nearly 12 seconds ahead of Reed after backing off the pace, while Dungey followed in a distant third.

It was the first win for Tomac in 11 races, dating back to the Daytona round at the halfway point last season. He started the 2017 championship with finishes of fifth, sixth, and eighth prior to Saturday’s race. Phoenix was also the site of Tomac’s inaugural 450SX Class win in 2015, which took place inside Chase Field.

“The only thing I can say is I’ve been in a funk lately. It’s been a bummer, and it’s been tough mentally, too,” said Tomac. “All I can say now is I feel like I’m back. I was able just to ride [tonight]. The past three weeks it wasn’t me, and it was pretty scary at one point, but we’re here [on top of the podium].”

Reed’s runner-up finish was his first podium result in 12 races, and adds to his all-time record, which now sits at 131. Dungey’s third-place finish was the 92nd podium result of his career. He’s finished on the podium in all but two races since the start of the 2015 season, 38 races ago.

“It was a good night. We’re up here on the box, but I really would have like to have been up front,” said Dungey. “Chad [Reed] was on my heels and no matter what I did I couldn’t seem to open up the gap. He was riding really good. No excuses [from me], tonight was a little bit of an off night. I wish I could have just been a little bit better.”

Even with the third-place finish Dungey still added to his advantage in the championship. He now holds a 15-point lead over teammate Marvin Musquin, who finished ninth. Tomac’s victory vaulted him into a tie with Seely for third in the standings, 20 points out of the lead.

In the Western Regional 250SX Class Main Event, Monster Energy/Pro Circuit/Kawasaki rookie Austin Forkner raced to his second straight SupercrossLive.com Holeshot Award with GEICO Honda’s Jimmy Decotis, Hill, and McElrath in tow. McElrath was able to get his Troy Lee Designs/Red Bull/KTM machine around Hill for third and together he and Hill both made their way around Decotis to move into second and third, respectively.

Forkner was able to lead for three laps, but McElrath eventually seized control of the race and quickly opened a gap over his competitors that surpassed three seconds. Hill was patient behind his teammate and waited for his opportunity to attempt a pass. On Lap 6 the door opened and Hill easily took over second, but he faced a seemingly insurmountable deficit to McElrath.

As he encountered lapped riders McElrath started to lose considerable chunks of time to Hill and soon the lead duo was mere bike lengths apart. With two laps to go Hill made his move and grabbed the lead. He quickly sprinted to an advantage of nearly a second and carried it through to the finish. It was the fifth win of Hill’s career and the landmark 250th victory in motocross history (supercross and motocross) for the legendary Monster Energy/Pro Circuit/Kawasaki team.

“It was just heart tonight. Shane [McElrath] was riding awesome,” said Hill. “He got around Austin [Forkner] and just pulled away from us. When I finally got around Austin I had so much ground to make up. [Shane] made me earn it, all the way to the end. When I saw the white flag I thought to myself, ‘no way did I just do this.’ I’m just so happy.”

After failing to transfer to the Main Event through his Heat Race earlier in the evening, McElrath earned his way in by winning the Last Chance Qualifier. The runner-up finish makes him the only rider in the Western Regional Championship to finish on the podium at all four rounds. Forkner earned his first career podium result in third.

“We overcame a lot of adversity tonight, and that’s kind of what woke me up a little bit,” said McElrath. “It’s a championship and I’ve been sort of riding a little cautious. I’m just ready to have that fire again. I felt good the whole race, and that [win] should have been mine. But Justin [Hill] was right there the whole time and he earned that one.”

McElrath continues to lead the Western Regional Championship, but his lead over Hill now sits at just four points. Yamalube/Star Racing Yamaha’s Aaron Plessinger, who finished fourth after starting ninth, sits 10 points out of the lead in third.

The 2017 Monster Energy Supercross season continues next Saturday, February 4, with the fifth round from Oakland Alameda County Coliseum in Oakland, California. It will mark the first afternoon race of the championship. The action can be seen via tape delay on FS2 at 4:00 p.m. PT / 7:00 p.m. ET.