Race report: Tomac and Cianciarulo victorious at round two! 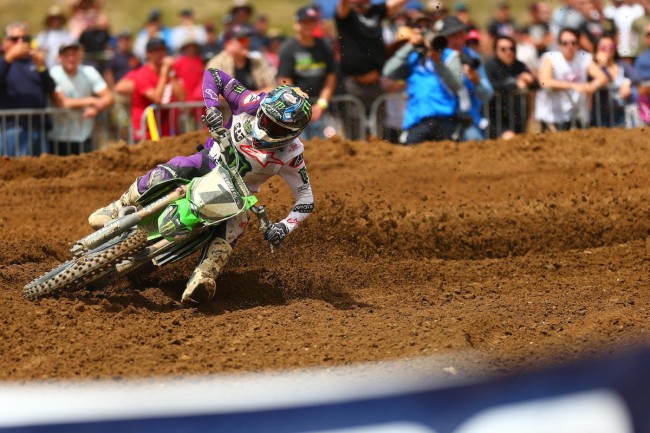 Eli Tomac and Adam Cianciarulo took the 450 and 250 race wins at Fox raceway for round two of the US Nationals but it was exciting racing all day long!

Ken Roczen led almost all of the first moto holding off a determined but not very aggresssive Marvin Musquin in the second half of the race – but then Tomac charged into the picture!

Tomac had started just outside the top five and eventually worked his way into third with just a couple of laps to go and, when Musquin inexplicably went wide trying to pass Roczen, Tomac simply went up the inside to take second and made the move on the German with a couple of laps to go to take what was an unlikely victory at one point in the moto!

It was a case of what could have been for Roczen and Musquin who will both feel they should have won the moto.

In race two Musquin got by early race leader Justin Bogle but this time Tomac started well and followed the Frenchman for the first fifteen minutes, eventually the pressure became too much and Tomac made his move and eased away to to a six second lead to take a 1-1 victory and take the points lead.

Musquin, back on form after riding battered and bruised at Hangtown, was second with Roczen holding Zach Osborne off for third in the moto and third overall, the German saying he just didn’t feel that comfortable out there and was glad to get out healthy.

The 250 class provided some superb racing! Justin Cooper holeshot race one and took the win but in the end under four seconds separated the top four!

Adam Cianciarulo came from an average start to third just behind a flying RJ Hampshire and Colt Nichols, Nicols had been second for the entire moto until the last couple of laps when the charging Hampshire, Cianciarulo and Sexton all caught him!

It was a bad race for Ferrandis who had an incident early with Cianciarulo that left the Frenchman on the deck, he hit the ground again after that but recovered to seventh.

But it a even worse for Hunter Lawrence. The Aussie had the fastest lap of the race but collided with Jordon Smith down a hill when third after the Geico Honda had a rock dislodge the oil bung and rob Lawrence of power, he was forced into a DNF after what was a promising moto.

In race two Shane McElrath led early but Adam Cianciarulo made some quick early moves into the lead but following him was a determined Lawrence!

Hunter was the hunter and chased AC for 20 minutes before making the move for the lead but with a 1.5 second lead himself, he washed out in a turn and handed the lead back to Cianciarulo!

Lawrence to the amazement of the commentators and Cianciarulo, reeled in Cianciarulo again in the last three laps but couldn’t make the pass to get his first moto win in the States. The Aussie could well have won the overall if it wasn’t for the first moto crash!

That meant it was Cianciarulo who took the overall win by a point from Justin Cooper, Lawrence crashing out of the lead robbed Cooper of his first overall win of his career with the Yamaha man coming home in fourth in race two just bending his teammate Dylan Ferrandis.

Thomas Covington was left scratching his head yet again, he started third in race one and finished 11th just missing out on a top ten in the last lap, but a terrible start in race two saw him get 25th and lapped by Lawrence, a ride he battled with just a few months ago in MX2!