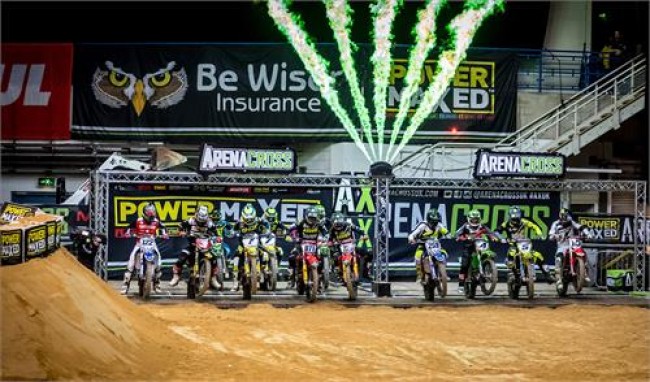 PR- The impressively loud and cheering Sheffield crowd were treated to a battle royale this evening at the last but one edition of the outstanding 2018 Power Maxed Arenacross Tour. A stellar performance from the leading Pros, the longest-running Mexican Wave of the series, a packed set of FMX tricks, flames and sparks galore and a change to the top of the leader board in the heart-melting youngest group of racers, the youth 65cc, were the order of the night.

As the sixth round of AX drew to a breath-taking conclusion, the Pro racers and their teams were already planning ahead to the big one, the holy grail of AX, the climax of the series, aka the Wembley final. With double points up for grabs for the Pro riders at the last round, any one of the top eight contenders have a mathematical chance of winning the series. Chances are that a Frenchman will lift the title since the top five namely Cedric Soubeyras (Team FRO Systems), Thomas Ramette (SR75 Team Suzuki), Charles LeFrancois (Buildbase Honda), Fabien Izoird (Buildbase Honda) and Cyrille Coulon (SR75 Team Suzuki) are fellow countrymen, they are followed by a Portuguese in the form of Hugo Basaula (Shocktech Kawasaki) and Australian Dan Reardon (I-Fly JK Yamaha), with another Frenchman, Adrien Escoffier (MVR-D St Blazey Husqvarna) in eighth.

With just one week to go until that final round, a familiar scenario is starting to unfold as just three points separate red plate holder Soubeyras from racing rival Ramette. Coulon is sitting there amid the top runners too. Can this be the year Soubeyras lifts the crown and enjoys the spoils of his hard labour? Not if the rest of the pack have anything to do with it. They may be compatriots but when when it comes to the Arenacross final, it’s simply every racer for himself.

Joe Clayton (Team Green Holeshot Kawasaki) revived from a second-place finish in the first of the two Pro Lites motos, in which Chris Bayliss (Wooldridge Demolition) put in a sterling performance, to take the second win and overall on the evening. He again made it through to the Pro head-to-head eliminator but couldn’t quite get the better of Coulon. A firm favourite with AX fans though, Clayton won the vote of the people and made it through to the Pro main event. He finished a credible eighth overall on the night, beating many Pro regulars. Clayton had a strong lead in the championship, 27 points ahead of Chris Bayliss who, in turn, is 20 points ahead of Jason Meara in third.

In the youth classes, Carl Osterman won both Supermini races, with Shaun Mahoney mirroring that result in the Youth 65cc. In the Supermini class, Newcastle’s Buster Hart still leads the championship with 214 points to Osterman’s 200 and Raife Broadley in third. Mahoney tops the 65cc leaderboard with 206 points, Zane Stephens is in second with 201 and Harvey Antrobus in third on 196.

All roads now lead to Wembley for the final of the 2018 Power Maxed Tour with the leading pack of hot-blooded Pro racers all determined to make the AX Pro title their own; and scores to be settled across all classes.

Doors open at 6.30pm with the evening’s show hitting the start button at 7.30pm.

Tickets are on sale via www.arenacrossuk.com