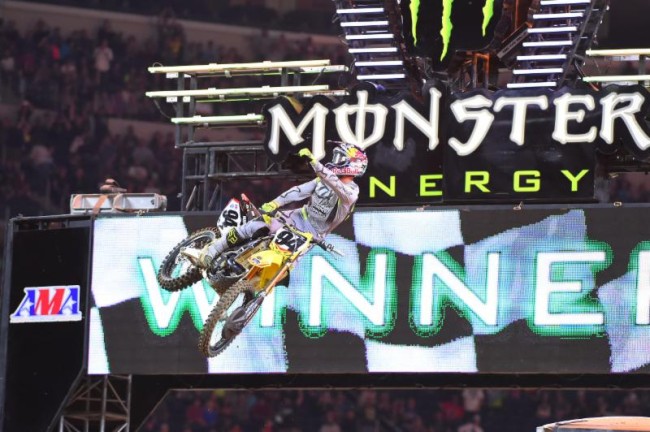 Roczen scored his first SupercrossLive.com Holeshot Award of the season to start the 450SX Class Main Event, rounding the first turn just ahead of Red Bull KTM’s Ryan Dungey and Smartop MotoConcepts Racing’s Mike Alessi. On the opening lap Dungey made a pass for the lead, however, it would not last long as Roczen retaliated to steal the lead back on Lap 1.

In the final stages of the race Dungey gained momentum and inched up onto the back wheel of the German rider. The two riders set a blistering pace, but Roczen would ride flawlessly, using lapped riders to his advantage to fend off multiple attacks by Dungey and claim his sixth career win.

“It felt great to grab the holeshot tonight, I think we have more wins than we do holeshots,” said Roczen. “Ryan [Dungey] was right on us the entire race, but we stayed tough and brought home the win.”

Dungey rode strong to finish second and Jason Anderson rounded out the podium in third place.

“At the end of the race we were pushing the pace,” said Dungey. “I made a pass for the lead, but Ken got me back exactly where I passed him. To leave with good points and finish second is something to be proud of.”

Dungey extended his 450SX Class podium streak to 23 races, dating back to last season, and now leads Roczen by 23 points in the championship. New Mexico’s Anderson sits in third place, 35 points out of the lead. It was Anderson’s first podium finish since he captured his first career win at the opening race of the season.

In the Western Regional 250SX Class Main Event, GEICO Honda’s Christian Craig earned his second SupercrossLive.com Holeshot Award of the year, leading Monster Energy/Pro Circuit/Kawasaki’s Joey Savatgy and Rockstar Energy Husqvarna Factory Racing’s Zach Osborne. Savatgy made a pass for the lead on the opening lap, but Craig struck back on Lap 1 to reclaim the lead. On the same lap misfortune struck Savatgy, who entered as the points leader, when he crashed in the whoops while running second, which allowed Webb to take over the position and Osborne to move into third.

Craig continued to put together impressive laps out front, but Webb, the defending chamion, stayed within striking distance throughout the race. As the Main Event wore on, Webb began closing in on the lead. On Lap 11 he dove inside of Craig to make an aggressive pass and quickly pulled away.

Webb claimed the win less than two seconds ahead of Craig. Osborne finished third, marking his third podium finish of the season.

“I came out of the gate strong and tucked to the inside through the first turn,” said Webb. “Throughout the race I was slowly able to gain time on Christian [Craig], eventually making a pass stick to claim the win.”

“It’s a bit disappointing to finish second tonight,” said Craig, who now has five consecutive podium finishes. “Webb rode great, but after leading the first 11 laps I was really gunning for the win.”

Savatgy remounted after his crash in last, but fought his way back to a 10th-place finish. He dropped to second in the championship standings, trailing Webb by 11 points. Craig is 16 points out of the lead in third.