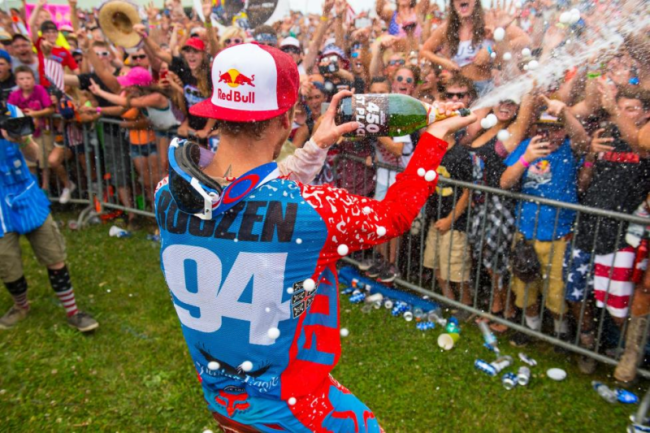 BUCHANAN, Mich. (July 2, 2016) – The Lucas Oil Pro Motocross Championship, presented by AMA Pro Racing, reached the halfway point of the 2016 season on Saturday afternoon, celebrating Independence Day with the annual tradition that is the RedBud National. It was more of the same from RCH Soaring Eagle/Jimmy John’s/Suzuki Factory Racing’s Ken Roczen in the 450 Class, sweeping the motos yet again for his fifth overall victory in six rounds. In the 250 Class, Yamalube/Star Racing Yamaha’s Cooper Webb earned his second straight overall win by sweeping both motos, which ultimately moved him atop the championship standings.

The opening 450 Class moto saw GEICO Honda’s Justin Bogle emerge with the holeshot, but Autotrader/Monster Energy/Yamaha’s Justin Barcia and several other riders quickly overcame him, dropping Bogle several positions. While Barcia sprinted out to the early lead, Roczen slotted into second and quickly applied pressure on the defending RedBud winner. Roczen moved into first before the completion of the opening lap and proceeded to open a healthy lead.

Barcia’s drop to second soon put him into the clutches Monster Energy Kawasaki’s Eli Tomac, who fought his way into third after starting inside the top five. Barcia and Tomac battled for the runner-up spot for several laps, which ultimately allowed RCH Soaring Eagle/Jimmy John’s/Suzuki Factory Racing’s Broc Tickle to enter the picture in fourth. As Tickle closed in, Tomac made a push and mounted an attack on Barcia for second, successfully making the pass and leaving Barcia and Tickle to battle for the final spot on the podium.

Roczen went on to open a double-digit margin over the field that he would never relinquish, taking his 10th moto win of the season by more than 13 seconds over Tomac, who stalled his bike late in the moto but maintained control of second. Barcia earned his best moto finish of the season in third, with Tickle fourth and Red Bull KTM’s Marvin Musquin fifth.

Bogle made it a sweep of the holeshots by also putting himself out front of the second moto, with Tomac hot on his rear fender. BTO Sports/WPS/KTM’s Andrew Short and Tickle followed closely behind, while Roczen pushed to work his way forward from just outside the top five. Tomac hounded Barcia and made the pass for the lead on the opening lap, with Tickle slotting into third and Roczen fourth. Roczen continued to surge forward, passing Tickle for third as Tomac moved into the lead. Not long after that he passed Bogle for second, setting the stage for a showdown with Tomac.

The championship’s top two riders roared out to a big lead with their early pace and as they approached the track’s marquee obstacle on Lap 1, LaRocco’s Leap, Roczen slipped to the outside of Tomac. The Kawasaki rider selected to not complete the massive uphill triple jump, while Roczen soared above him, ultimately gaining enough ground to slip by and seize control of the lead. Once out front Roczen was able to consistently extend his advantage over Tomac, which eventually surpassed 30 seconds.

While both Roczen and Tomac settled into their positions, the battle for the third unfolded between Bogle and Tickle. Michigan native Tickle patiently waited for his opportunity and made the pass on Bogle on Lap 3. Once Tickle took over third, the top three remained unchanged. Roczen crossed the finish to secure his 11th career win over 31 seconds ahead of Tomac, with Tickle in third. The German rider now has wins in 11 of 12 motos for the best start to a season since James Stewart went undefeated during the 2008 campaign.

Tomac posted 2-2 results for the second consecutive weekend to finish in the runner-up spot, while Tickle backed up his first podium since 2012 one week ago with another top-three effort at his home race (4-3).

Roczen’s 11th career victory extends his lead in the 450 Class standings to 53 points over Tomac, more than two full motos worth. Musquin, who finished fifth overall (5-6), moved to third in points and sits 126 points out of the lead.

Monster Energy/Pro Circuit/Kawasaki rookie Austin Forker led the field into the first turn of the opening 250 Class moto, securing his first career holeshot over the Yamalube/Star Racing Yamaha duo of Webb and Jeremy Martin. Webb was able to get alongside Forkner early and assume the lead, but the two riders proceeded to engage the position in a spirited battle for the top spot throughout the opening lap. The lead changed hands four times, but Forkner ultimately led his first ever lap of Pro Motocross competition. Behind them points leader and Monster Energy/Pro Circuit/Kawasaki rider Joey Savatgy was making a charge into third, followed by Yamalube/Star Racing Yamaha’s Aaron Plessinger and defending class champion Martin, winner of the last two RedBud Nationals.

Webb’s pressure on Forkner continued and he was able to reclaim the top spot shortly after completing the opening lap. He slowly started to inch away from Forkner, who soon was forced to deal with a surging Savatgy, who made the pass for second on Lap 2. The top two riders in the championship standings started to pull away from the field, with Forkner holding on strong to third. Halfway through the moto Martin was able to close in on the rookie and began applying heavy pressure. Forkner held off Martin’s advances, showing impressive resiliency, and as they continued to fight for the position it allowed Alex Martin to close in from fifth, establishing a three-rider battle for the final podium spot. Forkner continued to hold the Martin siblings at bay but eventually relinquished the position to both riders, dropping to fifth. Jeremy Martin moved into third briefly, but was passed by Alex shortly after they made the pass on Forkner. Alex Martin was then able to establish some breathing room between he and his brother.

Savatgy kept Webb in his sights for the entirety of the moto and as the pair took the white flag Savatgy was the closest he had been. However, Webb responded with one of his fastest laps of the moto to take the win by a second-and-a-half. Alex Martin followed in third, with Jeremy Martin fourth and Rockstar Energy Husqvarna Factory Racing’s Zach Osborne fifth.

Troy Lee Designs/Red Bull/KTM’s Shane McElrath started the second moto by racing to the holeshot, but it was Savatgy who made the quick move to assert himself in the lead. Rockstar Energy Husqvarna Factory Racing’s Martin Davalos followed in third, while Webb fought his way into contention after starting fifth. Savatgy and McElrath continued to battle for the lead, but it was Alex Martin who was making a push to the front. Martin passed Webb and soon found his way by Davalos for third, bringing Webb along with him into fourth.

The lead group settled in until a mistake by Savatgy on Lap 2 caused him to tip over briefly, handing the top spot to McElrath. Savatgy remounted in fifth, but gave up his hopes of the overall win as the Martin brothers and Webb all moved ahead. Just two laps later misfortune also struck McElrath, who crashed out of the lead and fell to fourth. Alex Martin then moved out front, followed by Webb and Jeremy Martin. On Lap 5 Jeremy Martin was able to get past Webb for second, putting the Martin brothers 1-2 in the running order.

Jeremy was able to close in on his brother, and in the process of mounting a challenge he lost control of his motorcycle and went down on Lap 7. That allowed Webb to move back into second and dropped Martin to eighth. Just a few laps later Savatgy experienced even more misfortune in his attempt to overcome the early tip over. As he attempted to pass McElrath for fourth, Savatgy landed harshly off a jump and lost control of the bike, throwing him to the ground. He lay on the ground for several seconds to compose himself, slowly reentering the race outside the top 10. He eventually fell outside the top 20 after receiving attention in the mechanics area, but fought back to a 16th-place finish in the end.

Out front, Webb mounted a late challenge on Alex Martin for the lead and appeared to catch his teammate off guard as he made the pass just after the finish line to start Lap 13. From there Webb pulled away, leaving Martin to deal with a hard-charging Osborne, who took advantage of his fellow competitor’s misfortune to move into third. The two remained mere bike lengths apart for several laps before Osborne made the pass just before taking the white flag. Their battle continued through to the finish and carried them onto the rear fender of Webb.

Webb capped off his first ever 1-1 moto sweep by taking the checkered flag just over one second ahead of both Osborne and Martin, who finished second an third, respectively.

“It’s definitely not easy [to win]. The Nationals are not easy,” said Webb. “It got rough in that second moto. We all had good starts, so I figured it was going to be a battle. And it was. Everyone was riding well and I knew they’d be right there. We’re all going fast and everyone wants to win, so it’s not like you’re going to dominate. Luckily, I was able to get it done today.”

Alex Martin finished with a runner-up in the overall classification (3-3), while Osborne’s strong second moto landed him third overall (5-2).

Webb’s fifth career win, combined with a seventh-place overall finish by Savatgy (2-16), resulted in a 23-point swing in the championship standings. Webb now sits atop the standings for the first time in his career and carries an 11-point lead over Savatgy in second. Jeremy Martin, who finished fourth overall (4-4), sits third, 34 points behind Webb.

The Lucas Oil Pro Motocross Championship will kick off the second half of the 2016 season next weekend with its anticipated return to New England. For the first time since the 2013 season The Wick 338 in Southwick, Massachusetts, will host the world’s most prestigious championship with the 36th running of the Red Bull Southwick National. The seventh round of the championship will commence on Saturday, July 2.