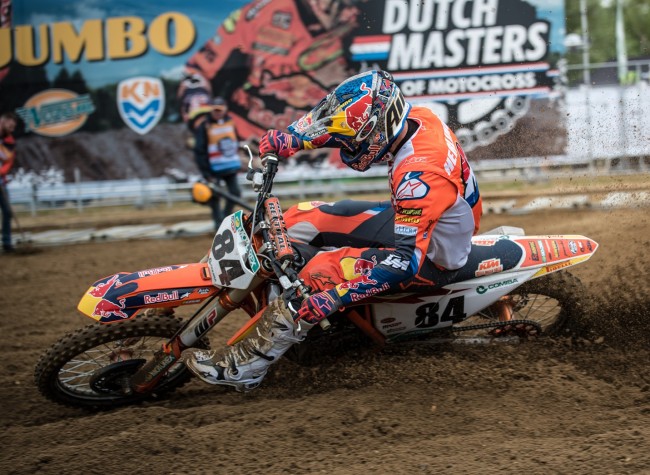 Rhenen, May 30, 2019 – With a victory in the first moto during Dutch Masters of Motocross in Rhenen, Jeffrey Herlings made his competitive comeback after his crash in January. The MXGP world champion was sidelined for almost half a year due to an injury, but at circuit in Kwintelooijen he showed his class again and again. He didn’t have it easy …

500cc: Hard fight
Of course all eyes were on Herlings. In the time training in the morning he already went quicker than some of best in their world going top by nearly two seconds. His start in the first moto was somewhat average, the Frenchman Romain Febvre took the lead, ahead of championship leader Arminas Jasikonis. Herlings followed a little further back.

After two laps, however, “The Bullet” started the chase of Febvre from the second position, followed by Jasikonis and Jonass. What followed was a very tough fight in which Jonass first took over the leadership from Febvrel after that it was Herlings who, under loud cheers from the fans, went into the lead.

The fight was not over with. Jasikonis followed, Febvre also charged but Herlings slowly walked away from them. He didn’t dominate yet, but it was a comeback in style. He won ahead Romain Febvre and Arminas Jasikonis.

Race two allowed Romain Febvre to enjoy the lead for a moment, but after three laps Herlings caught him and passed him around the outside. Febvre did not give up and hit back half a lap later. Herlings the. fell back to fourth place behind Jasikonis and Jonass. For a moment he seemed to be getting closer again, but he remained in fourth at the finish.

A complete race day was clearly still a challenge for the world champion who was third in the overall classification behind winner Febvre and Arminas Jasikonis.

The latter (Jasikonis) remains leader in the rankings, now with 140 points. He has a lead of no less than 31 points over Glenn Coldenhoff (today sixth and fifth). Pauls Jonass follows with 105 points. Herlings rises from scratch to the thirteenth place with 43 points.

250cc: Belgium on top
Jago Geerts took sporting revenge for the failure in round two in Axel. In Rhenen, the Belgian raced twice to the finish with a considerable lead. In the first moto he did it from Henri Jacobi (second), Ben Watson (third) and Roan van de Moosdijk (fourth).

The following race Watson and Van de Moosdijk finished one place higher. Jacobi had a harder time and finished in a hard-fought fifth place. He remains leader in the rankings, seventeen points for Geerts and 28 for Watson.

125cc: Ultimate dual battle
Again it was Kjell Verbruggen and Kay de Wolf who set the tone in the 125cc class. Leader in the Verbruggen standings took the first moto from De Wolf by force. He in turn won the second moto ahead of Kovacs from Hungary and Verbruggen.

Kay de Wolf gains a little bit of ground on Kjell Verbruggen in the rankings. With one racing day to go, the difference is eleven points.

85cc: Falcon strikes
Cas Valk rode a strong first moto. He didn’t make an instant lead but the seconds slowly increased to around five at the finish. The Belgian Sascha Coenen finished in second place, ahead of Karlis Alberts Reisulis from Latvia.

In round two, Valk ran out quickly and took maximum points and the overall victory. Behind him, again Coenen and Reisulis compete for the other podium places.

With only seven points difference between Valk and Reisulis in the standings, it is unprecedentedly exciting towards the final of Dutch Masters of Motocross 2019.

That final round takes place during the Zwarte Cross in Lichtenvoorde on July 19 (85cc and 125cc) and July 21 (250cc and 500cc). The day between July 20, the ONK Sidecar and Quad Masters will compete in their final.