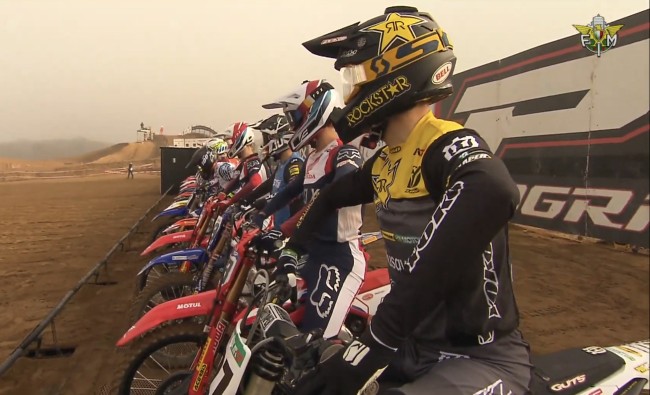 MX2:  Frenchman Maxime Renaux took the opening moto in Ottobiano after passing Adamo early in the race but it was Gianluca Facchetti who really opened some eyes to take second with a brilliant ride, no crashes and looking very smooth while doing so! Third was Tom Vialle who looked good but it was bad news for Roan Van De Moosdijk who crashed out of fourth while chasing Vialle and need medical attention as did Honda team personnel who got caught up in the crash. Thibault Benistant had a very good ride for fifth with some impressive lap times as he closed on Vialle at the end.

Vialle said: “I miss a bit the start, I started in 15th and came back strong but in the last ten minutes I got arm pump and could not ride as I could.”

MX1: In the 450 class it was Tim Gajser who won again. The world champ bumped Tonus out of the way in turn one but went wide leaving Lupino to take the holeshot, but it was a short-lived lead for the Italian. Gajser quickly worked his way into first and he remained there despite a bit of pressure in the last couple of laps from Mitch Evans who continues to impress this pre-season. Third was Arminas Jasikonis who got cut off hard out of the start by Evans then crashed with with lappers and had to work his way through the top ten but never got the chance to race the Honda duo.

Jasikonis commented: “I’m not so happy with my riding I struggled in the beginning the I started to get going. There are a lot of backmarkers and one took a wrong turn, so I had a little crash and bent my bike.”

Gajser said: “The lappers slow us down a lot, they were all over the place, so I had to change the lines and I got a little arm pump at the end so not completely relaxed but I’m happy.”

Superfinal: Tim Gajser nailed the holeshot in the Superfinal and controlled the race on what have become a treacherous courses with big ruts and some big bumps. René Hofer somehow got away second on ten factory 250 KTM and would hang on for a top ten and second MX2 man behind the very impressive Maxime Renaux who finished sixth and won MX2. Behind Gajser it was his teammate once again, Mitch Evans and the Aussie kept Gajser within distant sight the whole moto.

Arminas Jasikonis had to battle through the field again and clawed his way back to third, passing Tonus with three minutes to go in another hard ride for the Lithuanian. If he got the starts he might have challenged the the HRC Honda boys. Tonus took fourth in a strong ride with Alberto Forato making his 450 look like an 80cc as he worked his way into fifth in a very good performance.

Gajser: “I’m feeling really good on the bike. There is still a lot of ways to improve that’s why it’s good to race these races before the world championship. Next week we go to Mantova, can’t wait.”

Evans: “I cant complain, really happy. I’m working good with the team, this new bike is amazing, we are having fun out there.”

Jasikonis: “This moto was better, my start was a little bit better but I was too careful in the first turn. Otherwise I had a lot of fun, I should have pushed more in the first first laps, that’s a good lesson for me.”