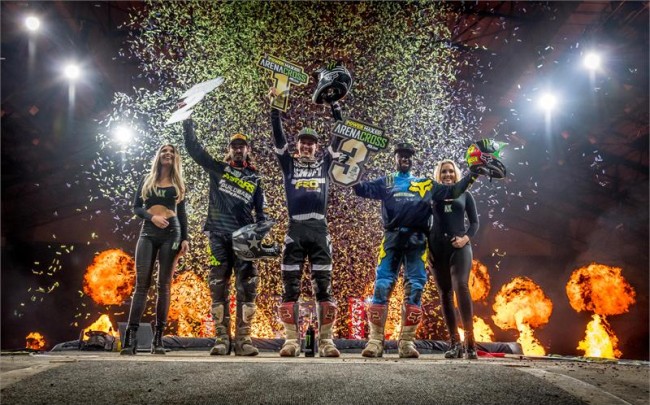 PR- The second leg of the 2018 Power Maxed Arenacross Tour, played out to a packed Metro Radio Arena, witnessed plenty of high-speed race action, Pro class mixed fortunes, and an abundance of Freestyle motocross this evening.

Prior to the main final, a number of leading Pro riders such as Brits Adam Chatfield, Ashley Greedy and Matt Bayliss together with Aussie hotshot Dan Reardon, found themselves in the last chance eliminator. Cedric Soubeyras earned an additional three points by cleaning up in the hot lap ahead of Fabien Izoird, and a rejuvenated Hugo Basaula. Eight riders automatically qualified through to the main event. Greedy and Reardon were seeded through from the head-to-head, whilst James Dunn and Luke Norris gained the recognition of the promoter to make their first appearance in the highly-prized end-of-evening finale.

The UK’s flu outbreak claimed an AX scalp in the form of former British MX champ Elliott Banks-Browne who, despite qualifying in 10th, was unable to make the evening’s races, leaving team-mate Norris to fly a solo Geartech Husqvarna flag. MXGP hotshot Evgeny Bobryshev escaped the claws of the eliminator and, clearly enjoying the challenges of the harder-packed Newcastle circuit, put in some solid performances to take fifth in the main event and fifth overall.

The AX FMX crew of Dan Whitby, Samson Eaton, Arran Powley and Nez Parker, again delighted the gathered audience with daring tricks and trains galore, and were joined by Australian, Ryan FMX-is-my-life Brown and master of the whip, the one and only Jamie ‘Squibatron’ Squibb.

The Pro Lites result was a repeat performance of last week’s opening round at Manchester. Joe Clayton took the final race win ahead of Jason Meara and Chris Bayliss. Clayton leads the championship on 78 points, with Bayliss on 70 and Meara 68. With five rounds still to go, there is much to play for.

In the youth ranks, 14-year-old Buster Hart had the arena on its feet when, racing on home turf, he brought the goods home for his friends, family and sponsors. The youngest racers of the Tour enjoyed a close tussle with Shaun Mahoney victorious, Jake Davies second and William Murphy third. Local rider Ryan Waggott from Carlisle had a terrific final to finish fourth; his best of the series.

The 2018 Power Maxed Arenacross Tour now heads south to Birmingham and The Genting Arena, next Saturday, the 20th of January. Doors open will open at 6.30pm, with the show kicking off at 7.30pm. Tickets are available via www.arenacrossuk.com