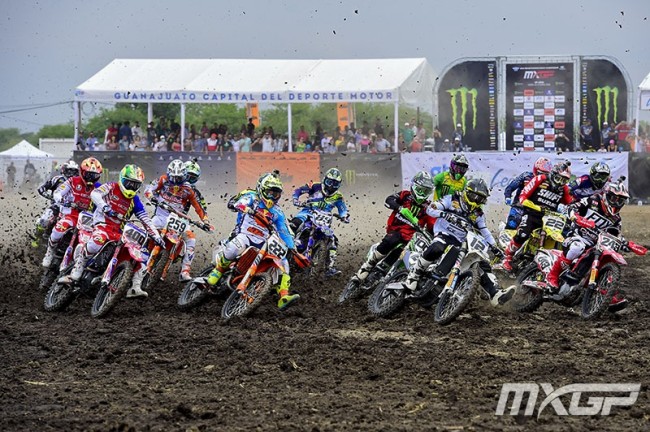 LEON (Mexico), 17 April 2016 – The dust has settled on the cactus and shrub that surrounds the impressive motocross track of Leon where the fifth round of the FIM Motocross World Championship took place earlier today. The thin air manifested from the high-altitude created an extra challenge for the racers and their machines, as did the blue groove sun baked clay, but it was Honda Gariboldi’s Tim Gajser and Red Bull KTM Factory Racing’s Jeffrey Herlings who excelled in the unique environment and topped the box in their respective classes.

The young guns, Honda Gariboldi’s Tim Gajser and Monster Energy Yamaha Factory Racing’s Romain Febvre, are really setting the tone in the championship this year. Febvre was last year’s rookie and is now the defending champion while Gajser, who is the 2015 MX2 World Champion, is the new rookie on the block. What these two are doing in the premier class and the way they have adjusted from the 250cc machines to the 450’s is incredible. Both riders are products of talent, dedication and drive, married with great teams and even better machinery. Gajser in particular, this weekend, was outstanding, he is so calm and focused out on track it’s incredible. Meanwhile Febvre chomped down a decent gap in the first race to pass Gajser for the win with a handful of laps to go, but in race two it was a different story with Gajser proving to be too strong, “I struggled a little bit with the settings on the bike”, Febvre said, “so I worked with the team late last night and today it was much better but I was missing something to have enough for the win and that is just how it is.”

Febvre and Gajser tied on points, 47 each, with Gajser being awarded the grand prix victory because he had the better result in the final moto, first. Gajser has now won three rounds of MXGP to Febvre’s two, but Febvre still leads the championship by three points.

Rockstar Energy Husqvarna Factory Racing’s Max Nagl is holding the torch for the seasoned riders in the premier class with his two third place finishes for third overall. The German is running a fierce pace at the moment, but isn’t quite in the same zone as the youngsters up front, Febvre & Gajser. Nevertheless, he landed on the box for third time on the bounce and has moved up to fifth in the world championship standings, five points shy of Evgeny Bobryshev in fourth and six shy of Antonio Cairoli in third.

Consistency is everything to Team HRC’s Evgeny Bobryshev who knows how important it is to get points on the board at each and every round. Today Bobby did what he needed to do without taking any risks, two fourths for fourth overall.

Monster Energy Kawasaki Racing Team’s Clement Desalle is making solid progress after he started the season with a broken radius in his arm, which was operated on only one week before Qatar. Because of the injury, the Belgian hasn’t been able to train too much and has said his race fitness is only about 85%. Two fifth place finishes for fifth overall here in Leon would have felt as almost as good as a win for Desalle.

Believe the hype. Jeffrey Herlings is back and better than ever. The Red Bull KTM Factory Racing rider is a cut above everyone at the moment and he hardly looks like he is breaking a sweat. While the old Jeffrey, the one we have seen in previous years, would ride the first laps like a bull at a gate, this year we are seeing a new and improved, mature and uber focused Bullet. “I pretty much lost the championship last season being too aggressive in the beginning” Herlings said after qualifying yesterday, “what I learned in the past is that you can win by five seconds or you can win by a minute, it doesn’t mean anything extra. So I just try to win and I try to do what people expect me to do.” Which is exactly what he is doing.

Team Suzuki World MX2’s Jeremy Seewer is looking very comfortable this year and his results are reflecting it. The Swiss rider is always smooth and consistent which are skills that have landed him on the podium for the fourth time this year. “I will keep working to try to get close to Jeffrey and try make his life a little bit more difficult” the optimistic twenty-two year old said.

There was no smile bigger than that of Monster Energy DRT Kawasaki’s Vsevelod Brylyakov who had hands down the best weekend of his career! The young Russian qualified fourth which was a result he was absolutely pumped with, but then to turn that into a second place in race one and a sixth in race two after a gnarly crash on the second lap, the young Russian was able to uncork his first bottle of bubbles on the third step of the podium.

It was a bit of a rough day in the office for Red Bull KTM Factory Racing’s Pauls Jonass who got off to two mint starts only to crash in both races. In the first moto the Latvian had a front-end wash out, an error of his own, while in the second race he tangled with TM Racing Factory Team’s up-and-comer Samuele Bernardini. Despite the adversity, the 2015 MX2 vice world champion bounced back in both races for two fourths and fourth overall.

Last but not least, with the last pick of the gate, getting a good start was the first challenge for Wilvo Standing Construct Yamaha Official MX2 Team’s Aleksandr Tonkov after his bike stopped due to a problem with the electronics in the Qualifying Race yesterday. It ended up being mind over matter for the Russian who just hammered it once the gate fell and rode solid in both races for a pair of fifths and fifth overall.