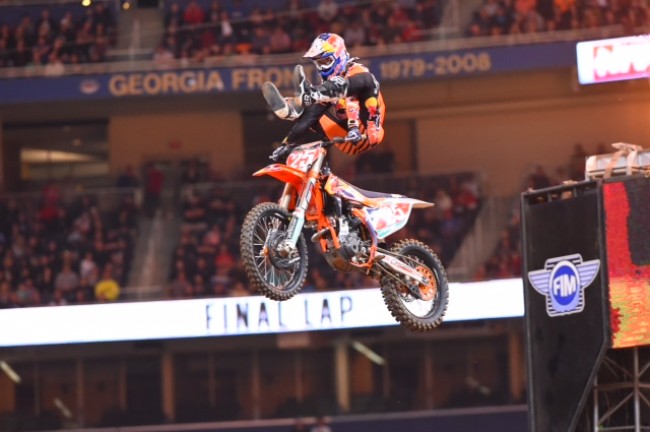 BTOSports.com/KTM’s Andrew Short opened the 450SX Class Main Event with the SupercrossLive.com Holeshot Award but was quickly passed by Dungey before being ejected from his bike. The crash forced Short to exit the race.

On the first lap, Autotrader.com/Toyota/Yamaha’s Weston Peick trailed Dungey in second with Rockstar Energy/Husqvarna Factory Racing’s Jason Anderson in third place. GEICO Honda’s Eli Tomac, who won last week’s Main Event in Detroit, moved into third place but Anderson answered back and re-passed him to hold down the number-three position.

Near the halfway point of the race, Peick was passed by Anderson, then Tomac and finally Team Honda HRC’s Cole Seely. Peick finished the race in fifth place, bouncing back from his 22nd-place finish last weekend.

On Lap 14, Tomac passed Anderson for second place, where he would finish. Anderson finished in third, marking his second podium finish of the season.

“That was a monkey off my back,” said Anderson. “I have been wanting to get back on the podium since the first race of the season. There are a lot of people behind me to help me get here, and I am going to come out swinging at the next race.”

Tomac now has seven podium finishes on the season and is second in season standings.

“I struggled off the start and didn’t make the fast passes early enough in the race,” said Tomac.

Dungey, who captured the second win in St. Louis of his career, has an 80-point lead over Tomac in season standings.

“I tried to open a gap on Weston [Peick], but he kept me honest in the early stages,” said Dungey.

Yamalube/Star Racing/Yamaha’s Jeremy Martin picked up the SupercrossLive.com Holeshot Award with Musquin in tow to start the Eastern Regional 250SX Class Main Event. Musquin moved around Martin in Turn 2 and the two traded places a few times on the opening lap before Musquin pulled away.

Defending class champion Justin Bogle worked his way through the field to fourth place and set chase to Savatgy but was unable to cut into the deficit. Martin finished second and Savatgy finished third.

“To be on the podium is where I need to be, but I want to be a little higher,” said Savatgy on his third podium of the season. “I can’t wait to get on the gate in New Jersey.”

Musquin, who finished second last weekend in Detroit, now has a 20-point lead in season standings with the final race of the championship set to take place April 25 at MetLife Stadium in East Rutherford, New Jersey.

“We work hard during the week, and come here prepared to race,” said Musquin. “I had a good pass early on and we battled on the opening lap.”

The next Monster Energy Supercross will take place Saturday, April 11 at NRG Stadium in Houston, Texas.