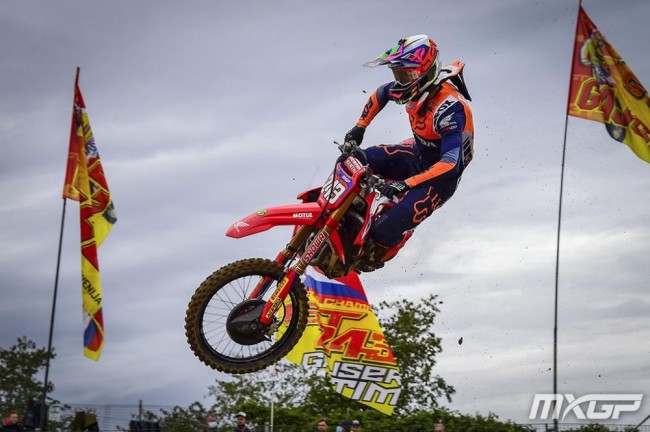 Tim Gajser came away with a brilliant overall win to take complete control of the 2020 MXGP world championship.

The red plate holder went 2-1 in the brutally rough deep sand as Tony Cairoli had a night going 13-7 for ninth overall to give Gajser a 48 point lead in the championship with only five rounds to go. The Slovenian acknowledging the extra work he and his team put in last winter in the sand to up his level on a surface that wasn’t his best, has really payed off.

A flowing Gajser was leading race one when he went down with a fast and smooth Gautier Paulin chasing him handing the lead and the win to Frenchman who rode fantastic to take his first moto win of the season. Paulin though, didn’t quite have the same magic in race two taking sixth but still took second overall.

Third overall was Jorge Prado who was fast but just didn’t seem to have the fitness on a very rough circuit to go with Gajser in the second half of either race. Third in race one then running second in race two until he came together with Jeremy Seewer and went down, dropping to fourth. Prado said he had been feeling a bit unwell yesterday but did admit the track was very physical on the 450.

Tony Cairoli only qualified in 14th before getting caught up in the first turn carnage in race one, then going down early in the race to finish a lowly 13th. In race two Cairoli was going better but couldn’t find a way past Paulin to finish 6th in what was a very disappointing and frustrating day for the Italian.

In MX2 it was two wins for the Kemea Yamaha team – but the overall win for a mighty impressive Tom Vialle!

In race one Ben Watson rode blinder, passing Vialle for the lead then holding strong under immense pressure from the world championship leader until it was Vialle who dropped it with a lap to go pushing for the win. It gave Watson time to savor his first ever world championship race win and a brilliant performance that he admitted made him speechless, such was the emotion of achieving a life long goal.

Race two for Watson didn’t go quite to plan as he crashed while fourth, pushing for a way by Renaux in order to stay with a fleeing Geerts and Vialle and keep his chances of the overall win alive. But Watson still remounted to get fifth and another podium on a day he will never forget.

Moto one was one to forget however for Jago Geerts. The pre-race favourite crashed trying to pass Watson early then, once he got back to third with the two leaders in sight he made a nother mistake and had to do all the hard work again! Geerts made it back to fourth but couldn’t make his way by a determined Renaux for third, something that would ulitimately cost him the overall win.

In race two Geerts made amends to pass Vialle and win the race but the duo set a ferocious pace with Vialle following Geerts’ lines again to pushing him right until the last lap and beat third by 30 seconds! Vialle didn’t win either moto but he made his point- he can ride the sand as well as anyone and now has no weaknesses in his game as he closes in on his fifth world title!