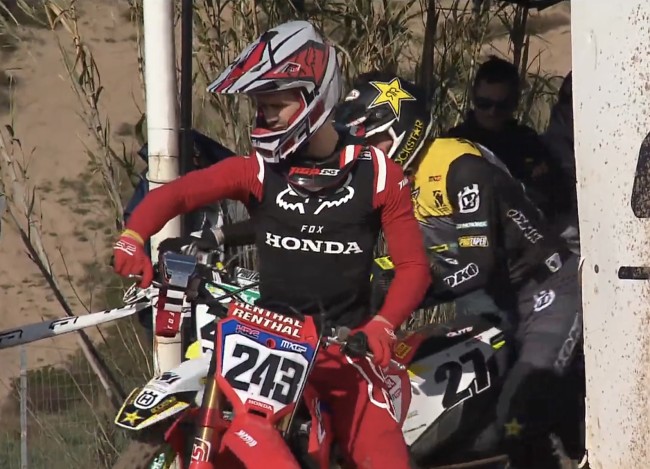 The International motocross season is finally underway and it wasn’t an easy start for the riders down in Riola Sardo, Sardinia, Italy with a rough sand track ready to test the eager participants in their first race of the year!

MX2– Jago Geerts took the holeshot from teammate Ben Watson with Maxime Renaux in tow. Renaux looked good early and was all over Watson only to go down and lose his chance at the win, eventually coming back to third but the leaders were long gone.

Geerts seemed to be controlling things out front but with a couple of laps to go Watson got right on his rear wheel and was looking for a way by. The young Belgian responded only for Watson to put the hammer down again and be right on Geerts rear wheel on the last lap despite getting held up by a backmarker with two laps to go! But Watson couldn’t quite find a way by in the time remaining leaving Geerts to take the first win of the year.

“We are very happy, they respect each other and didn’t do something wrong,” said a happy Bervoets after watching his charges duel for the win.

Watson said: “It was a really nice race, I had a lot of fun out there, we have been training here and it’s so different (faster in the race). I followed Jago the whole race and was trying to make the opportunity to pass him, I tried all the way to the last corner but couldn’t make it happen.”

Geerts commented: “It was a good race for me, I had some arm pump and it was really difficult to control the lead but in the end I won and I’m really happy to start the season with a win.”

MX1 – Tim Gajser debuted the 2021 Honda in style by taking a wire to wire victory in the sand but the real story was Mitch Evans! The Aussie finished second and actually caught Gajser slightly towards the end once Evans had dispatched a vibrant Monticelli who was very quick in the first half of the race.

Jeremy Seewer went from fourth to second early and was chasing Gajser when he went down but he did pick himself up to get back to third however, by this stage the damage to his chances of a win was done with the two Honda’s too far away up front.

Seewer said: “A good start for the season even though I made a mistake following a Tim. I’m happy I’m building up even thought there were some mistakes still.”

“Not at all,” Evans said when asked if his performance surprised him. “I’m on the best team there is, I have been able to ride with Tim on the new bike. I’ve always said the 450 suits me better and it’s good to prove it but there is a long way to go.”

Gajser commented on his first moto win: “I was feeling okay, I had a good start but quite early in the race I got arm pump. We have nice weather today so it is a really nice day of racing.”

Superfinal – Tim Gajser took the lead as carnage ensued for his teammate Mitchell Evans in turn two. Evans banged bars with Seewer out of turn one with the knock-on effect leaving Paulin up the bank and then Evans going down in turn two while second and trying not to get run over as the pack came through! Jeremy Seewer nearly went down doing the exact same thing as Evans while in his wheel tracks but somehow stayed on and moved into second.

Seewer gave chase but Gajser pulled out a nine second lead until, all of a sudden, Seewer was on Gajser’s rear wheel with only a few minutes remaining! Gajser had come together with a backmarker and hit the deck giving Seewer his chance at the win.

Seewer tried to get close enough to pass but with backmarkers not moving out of his way, the Yamaha factory man would lose and catch Gajser based on how much free track he had. Gajser did what he had to do, making good passes on the lappers and keeping his pace high to take the win and enjoyed a perfect start to his season with a double victory in the first race of the year.

Arminas Jasikonis was best of the rest after coming through the pack to take third, passing Geerts and teammate Jonass who had been battling for the position. Gautier Paulin, after getting passed by Jasikonis, followed the fast Lithuanian through the pack. upping his speed to match the rapid Husky man. Paulin would take fourth with Geerts, riding in third for a long time, finally coming home fifth, just ahead of teammate Watson.

Jasikonis: “First moto we didn’t have a great start and had to work my way through. Second moto I had a better start but I got pushed wide. I finished third and quite happy from where I started.”

Seewer: It was getting close because Tim made a mistake, I think he crashed with a lapped rider, it was a tricky situation getting around them. I had a good rhythm, I’m happy at this stage for the end of January.

Gajser: “It was a good day. I’m so happy to start the season after a long break. The second moto I had again a good start and I made a comfortable lead but after we started to get to the lapped riders they were way slower than us, one touched my front wheel and I made a huge crash! Thankfully I could pick up the bike quickly, Jeremy was one second behind so in the last couple of laps I had to push but anyway, I’m super to to begin the season like this.”