Race report: Gajser does the double in Russia and takes the red plate! 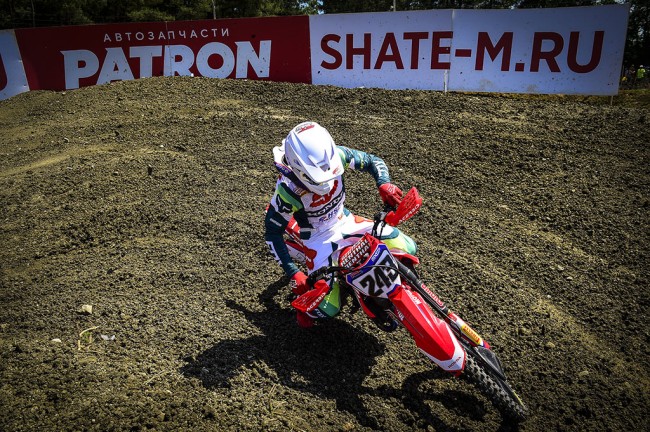 ORLYONOK (Russia) 9 June 2019 – The 2019 PATRON MXGP of Russia is in the books and was full of action. The warm Orlyonok weather along with a trick track demanded the most out of even the world’s best this weekend. Team HRC’s Tim Gajser and Red Bull KTM Factory Racing’s Jorge Prado solidified their MXGP and MX2 prowess as both now hold the Championship leader’s red plates after another weekend at the top step of the podium.

The weekend’s warm weather and blue skies was matched by the blue water of the Black Sea and warm welcome of Russia’s motocross fans. The picturesque location of the venue and the beautiful Russian community of spectators combined with the unexpected results made for an unforgettable weekend of racing.

Following yesterday’s qualifying results Monster Energy Yamaha Factory MXGP’s Romain Febvre lined up to the gate in pole position and when the gate dropped for today’s race 1 the Frenchman scored his second Fox Holeshot of the year. Team HRC’s Tim Gajser shot past the #461 almost immediately after they crossed the chalk and was into the lead as the opening lap kicked off.

Monster Energy Kawasaki Racing Team’s Clement Desalle got into second with a pass on Febvre Febvre along with Monster Energy Wilvo Yamaha Official MXGP’s Arnaud Tonus. The #84 Red Bull KTM Factory Racing machine of Jeffrey Herlings was in 5thbut his Red Bull KTM teammate Antonio Cairoli was way back outside the top 15.

BOS Factory’s Evgeny Bobryshev lost control of his Kawasaki on the main downhill section on the opening lap and crashed hard ending not only the race but his home GP. Tonus gained a spot as Desalle fell in a corner while Tonus’ Monster Energy Wilvo Yamaha Official MXGP teammate, Gautier Paulin, crashed out of the top ten damaging his front causing him to fall again before making his way into Pit Lane and eventually the paddock.

Herlings then found himself in 4th after the fall of Desalle with Rockstar Energy Husqvarna Factory Racing’s Pauls Jonass and Monster Energy Yamaha Factory MXGP’s Jeremy Seewer applying pressure. Seewer first passed Jonass but then Desalle surged past both Jonass and Seewer to take over 5th.

Gebben Van Venrooy Kawasaki’s Alessandro Lupino had a big crash and was unable to continue while fellow Italian and his friend Antonio Cairoli was stuck in 15th for 12 laps before finally making a pass on Team VHR KTM’s Jordi Tixier. Desalle was ejected from his bike at the end of pitlane straight with only four laps to go and was unable to rejoin the racing. Seewer took over the 4th spot while Gajser took the race win ahead of Tonus, Febvre, and Herlings. Cairoli gained 2 more spots in the closing laps to finish 12th.

The second and final race of the MXGP weekend started with a season first Fox Holeshot for Standing Construct KTM’s Glenn Coldenhoff with Gajser and Tixier just behind. Tonus was quick to move past Tixier along with Seewer. Seewer’s teammate Febvre fell in the early portion of the race from 7th costing him 6 positions with his former 7th place spot going to Cairoli.

Jonass passed Monster Energy Kawasaki Racing Team’s Julien Lieber to get into the top 5 behind his former MX2 rival Seewer. On lap 7 Jonass lost his top 5 spot to Lieber as Cairoli also went by into 6th before making it past Lieber the next lap, at the same Gajser finally made his way around Coldenhoff for the lead.

Coldenhoff lost the 2nd spot to Tonus immediately before losing a handful of other spots in the following laps to Seewer, Cairoli, Lieber, Jonass, Herlings, Paulin, and Febvre. Tonus then closed in right to the back wheel of Gajser and made an attempt to take the lead but clipped a trackside haybale and fell instead.

The fall of Tonus didn’t lose him any positions only time to Gajser that he could note recover. At the finish Gajser took his 3rd MXGP Overall in 3 rounds via double race wins, the MXGP Championship leaders red plate, and the first ever Russian Overall GP victory for Honda. Tonus took second overall with his 2-2 finishes and Seewer scored his career first MXGP podium overall, best MXGP race finish, and put not only the second Yamaha on the podium but also joined his Swiss compatriot Tonus to make history as the first time two Swiss riders have stood on the podium in the premier category of the FIM Motocross World Championship.

Tim Gajser, “I am feeling really good but both races were really tough because Arnaud was really fast and pushing. Overall, I am really happy winning again and thanks to everybody at Honda the bike is just amazing. I am just happy, three races ago I was more than 40 points behind Tony and now I have the red plate.”

Arnaud Tonus, “It wasn’t easy to fight for the lead, but I was super happy that I had quite starts so I could fight from the beginning and come quite close to Tim. I went for it and really wanted to pass him but made a small a mistake, it happens. I am happy I went for it anyway and could recover to finish second which is great, I am super thankful and super happy because 3 podiums in a row is amazing.”

Jeremy Seewer, ” It is amazing to make it on the MXGP podium it just feels a lot harder than even any of MX2 wins. It is a lot of work and a lot of fast guys so it feels really good. It is amazing to have two Swiss guys on the podium it hasn’t happened in the history of motocross in Switzerland and to do it on two Yamahas is even better.”

Red Bull KTM Factory Racing’s Jorge Prado took pole position into today’s races thanks to his win in Qualifying yesterday but spun off the gate for an uncharacteristic start outside of the top 10. Meanwhile it was BIKE IT DRT Kawasaki’s Darian Sanayei taking his first Fox Holeshot of the year.

Monster Energy Kemea Yamaha Official MX2’s Jago Geerts and Red Bull KTM Factory Racing’s Tom Vialle where in second and third but Rockstar Energy Husqvarna Factory Racing’s Thomas Kjer Olsen was on a mission and made it past Vialle quickly.

Not much later Olsen made it into second passing Geerts on the downhill leading up to the finish. Prado has made his way up to 5th by this point and took 4th from his teammate Vialle on the next lap before battling with Geerts over 3rd.

While the pair battle Olsen took the lead from Sanayei who then was caught by Prado after he made it by Geerts. The next lap Geerts also move forward past Sanayei who continued to lose position to Vialle and Honda 114 Motorsports’ Mitch Evans. With two laps to go Prado took the lead from Olsen as they entered the turn at the bottom of the downhill. Geerts tried to reel in Olsen for a last lap pass but wasn’t quite close enough.

The second MX2 race started with the 10 Fox Holeshot of the season for Prado with Darian Sanayei again getting a good start in 2nd. Olsen was in third just ahead of Marchetti Racing Team KTM’s Iker Larranaga and Yamaha SM Action MC Migliori’s Michele Cervellin.

Geerts didn’t have quite as good of a start as in race 1 but made his way into 5th by lap 2 with a pass on the American Mitchell Harrison from BUD Racing Kawasaki. The other American Sanayei was then passed by Olsen for 2ndas the Dane tried to keep Prado in sight.

Cervellin lost 4th to Geerts but gained it back as both him and Geerts shuffled Sanayei further back. After Vialle joined the top 5 by passing Sanayei on the 10thlap no further changes occurred at the head of the field. Prado passed the checkered flag for his 6thconsecutive overall win and 7thof the 8 races so far this season. Olsen took both 2ndin the race and overall while Geerts took third and rounded out the podium.

Jorge Prado, “felt pretty good this weekend, the track was hard but I felt good getting the Saturday Qualifying Race win and today I was in the back of the pack so I had to make my way up to the front, but I had good speed and fought all the way to the end to get the win. I am happy and looking forward to the next round.”

Thomas Kjer Olsen, “I felt good all weekend. Yesterday in the Qualifying I felt really good then we made some changes on the bike to make it feel really comfortable on the hard pack. Overall, I am happy I got to lead some laps, felt great on the bike, and everything so I am looking forward to Latvia for sure.”

Jago Geerts, “It was a really solid weekend for me, I was really happy with the starts, I had three good starts this weekend which is positive for the rest of the season. Next weekend is Latvia, one of my favorite tracks but the goal is the same, to be on the podium, so we’ll see.”