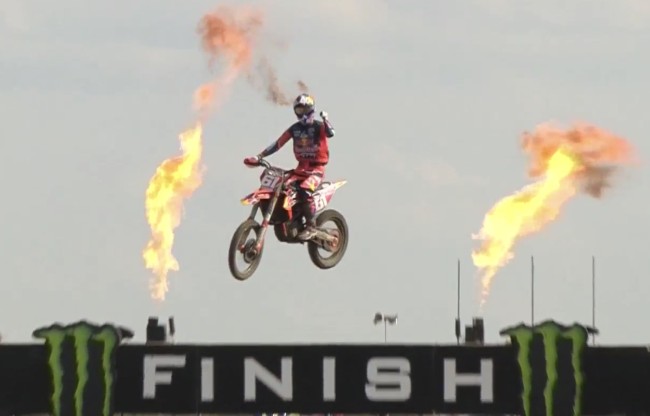 Even a first moto crash in the hard ruts in Germany couldn’t prevent Tim Gajser from a dominating double victory in Germany as he bids to win his third world title at just 22 years old.

Gajser holeshot both motos and, despite that first race crash and being kept honest by an impressive Pauls Jonass in race two, was never really pushed beyond his comfort zone with the factory Honda rider winning his fifth GP in a row!

Jonass’ second place looked to be enough to secure a second podium of the season after a static race in the leading positions, until Gautier Paulin passed Max Anstie for fourth with a few turns to go on the final lap to nick third overall off the Latvian!

The factory Yamaha duo had their problems in race two after strong rides in race one with Febvre going down on the start straight and Seewer crashing on lap one in the rites forcing both to fight hard through the field on a track that was very hard hard to pass on with all the ruts preventing line changes, even on some of the straights.

While Gajser is running away with the championship, the battle is on between the Yamaha’s for third with Jeremy Seewer only one point ahead of both Arnaud Tonus and Gautier Paulin who are tied on 188 points.

Gajser said of his day: “I’m enjoying racing so much right now, the weekend couldn’t go better, we got the holeshots that were missing in the first half of the season.”

Jorge Prado stormed to victory in Germany going unchallenged in both motos, showing his supreme technical skills and confidence on an overly rutted Teutschenthal circuit that made passing and line changes very difficult thanks to an increasingly confusing track prep crew, who seem to be doing more harm than good in managing a track for safety and good racing.

Tom Vialle took second overall (2-3) in one of his best rides of the season. The Frenchman was indeed the closest rider in terms of speed to Prado and when he is on telly shows promise for the future.

Mathys Boisrame rode superb in race two passing Vialle late on for second in the race and to claim his maiden Grand Prix podium. Boisrame revved his bike with joy after the chequered flag to show just how much it means to get a podium in a very tough class.

But it was disappointment for in-form Jago Geerts who crashed in the ruts in race one, eventually finishing ninth, then, while running third , had a bike issue that ruled him out of the race.

Henri Jacobi was fifth overall on home turf after a third in race one then a dramatic race two that saw him go down in the ruts then collide with teammate Adam Sterry on the pit straight, leaving the Brit on the deck and angrily gesticulating at his team for Jacobi’s aggressive move!