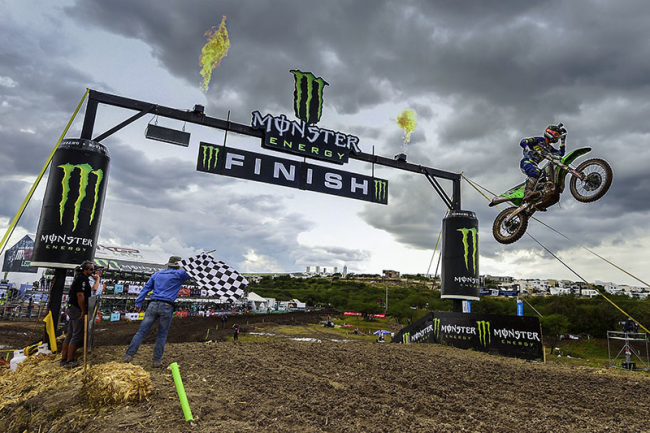 ALEON (Mexico), 13 September 2015 – Overnight storms made the conditions extremely tough and technical here at the circuit of Leon for the penultimate round of the FIM Motocross World Championship. The saturated dirt, which is a mix of clay and soil, became very thick and sticky, which kept the riders on their toes as they were faced with the challenge of riding fast but smart.

Consistency wasn’t a problem for Yamaha Factory Racing Yamalube’s Romain Febvre who waxed everyone today for a perfect fifty point score, his fourth this season. Meanwhile Monster Energy Kawasaki Racing Team’s Thomas Covington was the break out star in MX2 after hitting two milestones with his first ever race win and MX2 grand prix overall.

It was business as usual for Yamaha Factory Racing Yamalube’s Romain Febvre who upped his stats to fourteen race wins, twelve consecutive podiums, of which seven have been grand prix overalls. The 2015 FIM Motocross World Champion made it look far too easy today when he won the first race with an even bigger gap than the one Ryan Villopoto pulled in the Qualifying Race in Thailand, 45 seconds to RV’s 33.“It’s never easy but this one was really good, I enjoyed the track. This morning it was really muddy but the second race the track was perfect and I had a lot of fun.”

For Hitachi Construction Machinery Revo KTM’s Shaun Simpson it’s simple. The gnarlier, the better. The overnight rain fell completely in favor of Simpson who is having his best ever season in the premier class. SS24 reveled in the rutted up circuit in race 1 for a convincing second place finish but what was really impressive was they way he diced his way through the pack in race two and passed factory rider after factory rider to take another second for second overall. “The track in the second race was how every grand prix should be. There were a lot of lines to pass and I didn’t feel stressed, I felt smooth and confortable. Overall it’s just nice to show I can run up front and I can be on the podium and show good speed, not only in the sand.”

There are only fifty points left to race for this season which means that Team HRC’s Evgeny Bobryshev has already concreted a top three result as he is 58 points clear of Simpson in fourth. This weekend the Russian made ten points on his Team HRC teammate Gautier Paulin and now trails by 27 points which means he is still in the running for second place in the championship.

When Yamaha Factory Racing Yamalube’s Jeremy Van Horebeek gets the start he can run the pace which was evident in race two as he went bar-to-bar with Paulin, Simpson, Bobryshev and Coldenhoff in a massive battle for second. Simpson and Bobryshev both ended up nudging him back fourth which is the result he took away this weekend. Meanwhile Rockstar Energy Suzuki Europe’s Glenn Coldenhoff rounded out the top five after a mistake-riddled. Nevertheless the Dutch rookie recovered well in both races for two top five finishes.

What better way to head into your home grand prix than as the most recent round winner? Monster Energy Kawasaki Racing Team’s Thomas Covington hit a couple of milestones today and proved just how versatile he is with a solid ride in race one for fourth, which he followed up with his first ever race win in race two and overall victory. “I am beyond stoked. I didn’t even know I had the overall win until I walked up to the podium and I had to ask where I should stand. It is an amazing feeling.”

Honda Gariboldi’s Tim Gajser didn’t have the best start to the day. The red plate holder binned it big time in race one but only lost one position. A couple of laps later a message was put out on his pit-board “save bike!” which for Gajser, a rider who is a complete animal and uses every ounce of power, made it a nail biting end to the race. Nevertheless he nursed it home for fifth and then rode smart in race two for second place and second overall. He now leads the championship by 18 points over Pauls Jonass.

Kemea Yamaha Yamalube’s Benoit Paturel was visibly pumped to uncork his first ever bottle of bubbles. “It is incredible for me. This year I have progressed step by step and to take my first podium, the sensation is incredible, I think for every rider it’s the same.”

Red Bull KTM Factory Racing’s Pauls Jonass, mentored by the greatest of all time Stefan Everts, had the craziest weekend. Just when it looked as though the title challenger had hooked a gear, with his race 1 win and 9 point gain on the red plate holder Gajser, it all turned sour when he crashed crossing the Fox Holeshot line (but still took it) and then again a lap later in spectacular style when he was catapulted off his bike. Even though the Latvian lessened his chances of claiming the 2015 FIM Motocross MX2 World Championship title, he can count himself lucky that he walked away from such an enormous crash unscathed.

The biggest key to muddy conditions is to keep the momentum up, which coincidently is the same tact necessary to ride sand. Monster Energy DRT Kawasaki’s Max Anstie was fast in race one where he was second behind Jonass. In race two he crashed out of fourth and only managed to salvage tenth but still rounded out the top five.