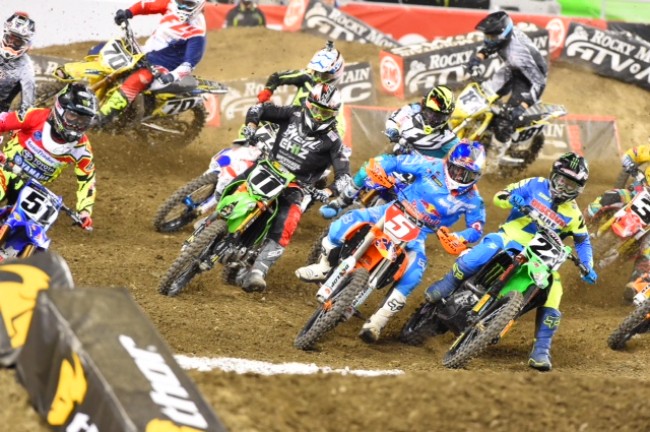 Autotrader.com/Toyota/Yamaha’s Justin Barcia, who is in his second race back from injury, won the SupercrossLive.com Holeshot Award in the 450SX Class with Discount Tire/TwoTwo Motorsports’ Chad Reed following in second. While battling for the lead on Lap 2, Reed crashed and dropped to last place.

Tomac made one final move for second place on Lap 10 to pick up his ninth podium finish of the season. Peick held on for third place, which was the first best finish of his career.

Coming into tonight’s race, Dungey was tied with Jeff Ward for eight place on the all-time 450SX Class win list, and he is now in sole possession of that position.

“Today was rough; it took a few practices to finally get the bike dialed in,” said Dungey. “The Heat Race win gave me a good spot on the gate for the Main Event, which was a big help in getting the start I did.”

“It’s been a rough season for me, many ups and downs,” said Peick. “To be able to put the bike on the podium for the team is awesome. I am stoked.”

On Lap 8, following an intense battle between Hansen and Webb, Webb took over the lead and rode to his sixth win of the season and fourth consecutive. Hansen was forced to withdraw from the race due to mechanical issues.

Plessinger was holding down the number three position when he once again crashed on Lap 9. Plessinger’s crash allowed Hill to move into second place, where he would finish, marking Hill’s second podium of the season. Martin finished third, marking his fifth podium finish of the season.

“It was definitely a wild and hectic main event. I just tried to get up as fast as I could and charge,” said Webb. It was basically a race to get your bike up the fastest and it worked out. I had fun racing with Hansen.”

Racing continues next weekend at MetLife Stadium in East Rutherford, New Jersey, where the first-ever live broadcast of Monster Energy Supercross will take place on FOX at 3:00 p.m. ET.