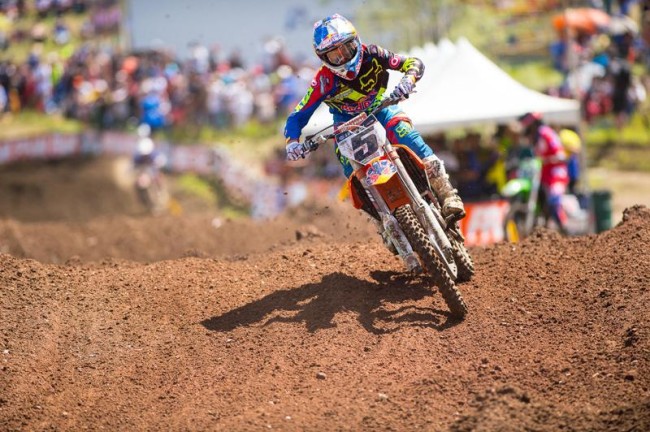 LAKEWOOD, Colo. (May 30, 2015) – The third round of the 2015 Lucas Oil Pro Motocross Championship, sanctioned by AMA Pro Racing, featured the series’ annual visit to the mile high altitude of the greater Denver area for the True Value Thunder Valley National from Thunder Valley MX Park. After a day where 450 Class points leader Eli Tomac pushed his undefeated record to five motos before crashing out of the lead in the second moto, it was Red Bull KTM’s Ryan Dungey who took advantage of the opportunity to earn his first overall win of the season and take over the championship lead. In the 250 Class, Yamalube/Star Racing Yamaha’s Jeremy Martin claimed his second overall victory of the season with a 1-1 effort, moving back into the points lead he held after the opening round of the season.

Dungey felt the pressure from Roczen immediately and the defending champion was able to move into the lead for the first time in 2015 on the opening lap. That dropped Dungey into the clutches of Tomac, who made quick work of Anderson to move into third and then proceeded to pass Dungey and take over second before the first lap was completed. Shortly after losing the spot to Tomac, Dungey briefly went off track and lost two more spots to cross the line in fifth.

Roczen came under fire from Tomac as the second lap got underway and the two would stay less than a bike length from one another for a couple laps. Roczen tried to keep Tomac at bay, but the Honda rider made an inside pass work on Lap 3 and took command of the moto, much to the delight of the home crowd. Tomac’s margin would consistently grow as the race wore on and he maintained his undefeated record with a fifth straight moto win by 14.546 seconds. Dungey had an impressive comeback to pass Roczen with two laps to go and finish second, with the Suzuki rider third.

In Moto 2, Team Honda HRC’s Cole Seely edged out Autotrader.com/Toyota/Yamaha’s Justin Barcia for the Motosport.com Holeshot Award, while Tomac, Roczen and Dungey all slotted into the top 10. Like the first moto, Tomac came out of the first turn in fourth and seized the opportunity to get away from his closest competitors by moving into the lead before the conclusion of the opening lap.

Tomac had a huge crash in race two and dislocated his shoulder. Pic: Cudby

Tomac’s surge to the front put the pressure firmly on Roczen and Dungey to keep pace. Both riders methodically moved their way forward and into podium spots by Lap 3, but not long after that the entire complexion of the race and potentially the 2015 championship changed. Holding about a 14-second margin on the field, Tomac’s rear wheel hit a bump that caused the back end of the motorcycle to jump sideways, which then slammed Tomac hard to the ground after he attempted to correct it. Tomac was attended to by the medical crew and taken off the track, recording a DNF. Team Honda HRC confirmed following the race that Tomac suffered a dislocated right shoulder, which was then put back into place by the series medical staff. He will undergo further evaluation next week.

With Tomac out, Roczen moved into the lead and carried over a five second gap on Dungey in the closing laps. The No. 1 plate holder looked to be on his way to back-to-back wins at Thunder Valley until a crash with two laps to go erased his advantage over Dungey and put the pair mere bike lengths apart. Roczen tried to hold Dungey off but lost the lead and fell again soon after, effectively giving the second moto win and the overall victory to Dungey. Roczen later revealed he suffered a flat front tire, which caused each of his late tip-overs.

“We made some changes coming into the weekend, but this track was much different than anything we had prepared for,” said Dungey. “We adjusted to that and were good coming into the motos. I got a good start in the first moto but made a mistake there early. Luckily I was able to bounce back. In the second moto I didn’t get the start I needed, none of us [Eli Tomac, Ken Roczen] did, but I was able to work my way forward. I saw Eli took a tumble so I hope he’s ok, but the track was really difficult today. We caught a bit a gift [with Roczen’s crash], but we kept our head down all day and it ended up working out.”

“I’ve been trying to figure things out on the motorcycle and it was really good in the second moto, which made it a little bit easier for me,” said Roczen, who is racing through a stress fracture in his spine. “I planned to push hard over the final couple laps [in Moto 2] but I went down and lost all the ground to Ryan [Dungey]. I tried to push again when I got back up and ended up crashing a second time, so I was wondering what was going on. When I got going again I noticed it was turning weird and I realized I had a flat tire. We’ve made a lot of progress since the start of the season so I’m happy to be on the podium given how rough things have been for me the past few weeks.”

Dungey entered the race facing a 19-point deficit in the championship standings, but with Tomac’s DNF in the second moto and seventh-place overall finish (1-33), Dungey took over the 450 Class points lead following his win and now carries a three point lead into the next round. Tomac still sits second, while Baggett moved into third, 29 points back.

The 250 Class saw a surprise atop the practice charts when the day began as GEICO Honda’s Christian Craig, who came out of retirement to fill in for an injured Justin Bogle, earned the Bud Light Fastest Qualifier in his first race back. When the gate dropped on Moto 1, Craig found himself mired outside the top 10 while Martin grabbed the Motosports.com Holeshot Award ahead of Troy Lee Designs/Lucas Oil/Red Bull/KTM’s Jessy Nelson and Red Bull KTM’s Marvin Musquin.

The early advantage by Martin allowed him to sprint in the opening laps and establish a comfortable lead, leaving Nelson and Musquin in a fierce battle for second. Nelson held Musquin off for three laps, but the 250 Class points leader eventually got by after Nelson briefly went off the track at the finish line. Just a few laps later as he looked to track down the defending series champion out front, Musquin went down and fell outside the top 10. He was able to remount, but took his time getting back up to speed.

Without the pressure of anyone behind him, Martin cruised to his second moto win of the year by 18.720 seconds. Musquin’s absence resulted in a spirited battle for second between Nelson and Rockstar Energy Husqvarna Factory Racing’s Zach Osborne that lasted the entirety of the moto. Nelson appeared to have hold on the runner-up spot, but Osborne was able to make a last-lap pass to steal the spot, leaving Nelson third. Musquin recovered to finish 14th.

Martin kept the ball rolling into Moto 2, sweeping the Motosport.com Holeshot Awards for the afternoon, this time with Osborne, Musquin and Nelson on his rear fender. Looking to rebound from the misfortune of the first moto, Musquin made a quick move on Osborne to take over second and keep Martin in his sights while Nelson followed into third. Martin gradually opened a multiple second lead on Musquin as the lead duo checked out on the field.

With the top two spots spoken for, the battle for the podium once again came down to Nelson and Osborne. This time Osborne made the move early, on Lap 5, and placed himself firmly in the spot. Nelson continued to lose ground as the moto wore on, ultimately dropping out of contention for the overall podium. Martin completed the moto sweep 18.604 seconds ahead of Musquin in second, with Osborne capping off his best ever afternoon of racing in third.

Martin’s dominant 1-1 day gave him his second overall win of the season, one week after he lost the points lead with an adversity-filled outing. Osborne earned a career-best second-place finish (2-3) and put Husqvarna back on the 250 Class podium for the first time since 1976 when it was called the 125cc Class. Monster Energy/Pro Circuit/Kawasaki’s Adam Cianciarulo earned the first overall podium finish of his career in third (5-4).

“I didn’t necessarily feel dialed all day, but I got the bike better as the day went on,” said Martin, who now has seven career wins. “I knew I’d be able to do well in the motos, my fitness is better than it’s ever been. Today was an awesome day. When you train the way we do during the week you dream about getting two holeshots and leading every lap. It was a perfect day with the exception of practice, where we didn’t get the fastest lap. The track was really tough today and if you weren’t on your game the entire time it was definitely going to bite you. I’m happy we walking away with another win and the points lead.”

Martin erased a 19-point deficit to Musquin in the 250 Class standings and moved ahead by two points after Musquin’s seventh-place overall effort (14-2). Nelson, who finished fourth (3-7), moved into third, 48 points back.