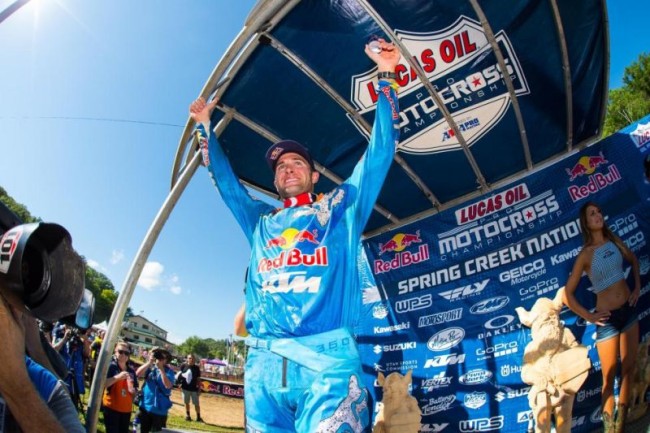 MILLVILLE, Minn. (July 18, 2015) – The 2015 Lucas Oil Pro Motocross Championship hosted its eighth round on Saturday with its annual visit to Minnesota for the La Crescent Wine & Spirit Spring Creek National. On a historic afternoon in which homegrown talent sat atop both championships for the first time at Spring Creek MX Park, Minnesota-born riders Ryan Dungey and Jeremy Martin each added to his respective points lead. Dungey, who won an ESPN ESPY Award last Thursday, enjoyed his most dominant performance of the season, sweeping the 450 Class motos aboard his Red Bull KTM to take his third win of the season. Martin narrowly missed out on back-to-back 250 Class wins at his home track, finishing second to his Yamalube/Star Racing Yamaha teammate Cooper Webb, who bounced back from an injury-riddled season to earn his first overall victory of the summer.

Dungey started the day by putting his KTM atop the timed practice chart as the Bud Light Fastest Qualifier. When the first moto got underway, he put himself at the front portion of the field, following Motosport.com Holeshot Award winner Justin Barcia and his Autotrader.com/Toyota/Yamaha teammate Phil Nicoletti into the first turn. Dungey made quick work of Nicoletti to move into second and was able to apply pressure on Barcia towards the end of the opening lap. The lead changed hands just before the finish line, and from there Dungey set sail on the field.

Barcia, winner of the last two rounds, kept Dungey honest for several laps but eventually the distance between the top two began to grow. Dungey opened up a multiple-second advantage that he was able to maintain through to the finish, leading all 16 laps of the moto and crossing the line 4.469 seconds ahead of Barcia. Defending 450 Class Champion Ken Roczen followed in third after starting fourth aboard his RCH Soaring Eagle/Jimmy Johns/Suzuki Factory Racing machine. Team Yoshimura Suzuki’s Blake Baggett and RCH Soaring Eagle/Jimmy Johns/Suzuki Factory Racing’s Broc Tickle both overcame starts outside the top 10 to finish fourth and fifth, respectively.

When the field barreled into the first corner to start Moto 2, Barcia was able to once again put his Yamaha up front, sweeping the Motosport.com Holeshot Awards with Rockstar Energy Husqvarna Factory Racing’s Jason Anderson and Team Honda HRC’s Freddie Noren in tow, while Dungey lurked behind them. Anderson moved into the lead briefly, but Barcia responded to reclaim the position. Dungey was able to make quick work of Noren for third and then made the pass on Anderson to take over second on the opening lap.

Barcia was able to keep Dungey behind them for the first few laps, setting the stage for another race-long battle between the two. However, after studying his rival’s lines Dungey seized the opportunity to make the pass happen on the track’s steepest downhill section on Lap 3 and soon pulled away. The KTM rider extended his advantage over Barcia to multiple seconds and the lead duo ran away from the rest of the field, led by Roczen, who made the pass on Anderson to take over third on Lap 2.

Dungey was fantastic on his home track. Pic: Cudby

Dungey raced to his first 1-1 sweep of the season 5.148 seconds ahead of Barcia. Baggett made a late pass on Roczen to grab third, with Noren rounding out the top five in a career-best moto effort.

“The track was difficult today, but I was looking forward to it. This place can get rough and I enjoy it when it does,” said Dungey, who won at Spring Creek for the fourth time and is now the second-winningest rider at the facility. “I got a good start in the first moto and was able to get around Jusitn [Barcia] early, then I just rode my own race. In the second moto it took a little longer, but I really wanted to get that 1-1 since I hadn’t done that yet this season. The bike was really working great and I was really able to get down the hills well. I knew that if there was a pass to be made, that’s where it would be.”

With the victory, Dungey now has the most overall wins in the 450 Class with three, breaking up a three-way tie between himself, Barcia and an injured Eli Tomac, who rides for GEICO Honda. Barcia’s runner-up finish (2-2) gives him 1-1-2 overall finishes over the last three rounds, while Baggett secured the final podium spot in third (4-3) via tiebreaker over Roczen (3-4).

“I felt good all day. I got good starts and that was huge,” said Barcia. “Ryan [Dungey] just had a little bit more than me today. I tried to do all I could but it didn’t happen, so that’s a little frustrating. I saw where he was faster, but I couldn’t figure it out for some reason. Overall it was a frustrating day because I knew I was good in places, but I just couldn’t make it happen.”

Dungey’s lead in the championship standings now sits at 56 points over Roczen in second, with Barcia third, 69 points back.

In the 250 Class Jeremy Martin laid down the fastest timed practice lap to earn the Bud Light Fastest Qualifier, but it was GEICO Honda’s RJ Hampshire that emerged with the Motosport.com Holeshot Award in the opening moto ahead of Red Bull KTM’s Marvin Musquin and CycleTrader.com/Rock River Yamaha’s Alex Martin. Musquin lost control of his motorcycle on the opening lap and cut across the track in front of Martin, sending him to the ground and back to 10th. Musquin, who entered the afternoon seven points out of championship lead, continued and eventually took over the lead from Hampshire on Lap 1.

Behind the fight up front the Star Yamaha duo of Martin and Webb were battling their way forward from fifth and sixth-place starts. Webb showed impressive pace early and was able to pass his teammate, setting his sights on the lead. As Musquin came to complete Lap 2, he crashed and took a lengthy amount of time to get back into action, eventually re-entering in 10th. That misfortune handed the lead back to Hampshire, but the hard-charging Webb was able to assume control of the moto the following lap, bringing Monster Energy/Pro Circuit/Kawasaki’s Joey Savatgy with him into second. Webb quickly opened a multiple-second lead that remained through the entirety of the moto, while Savatgy eventually was forced to deal with pressure from Martin, who took about half of the race to get going.

Webb backed off in the closing laps to take his first moto win of the season by 1.860 seconds ahead of Savatgy, who survived an all out attack from Martin for several laps. Martin rounded out the podium in third, with a broken clutch hindering his late charge on Savatgy. Alex Martin recovered to finish fourth, with Hampshire fifth. Musquin endured more misfortune and eventually finished eighth, losing valuable championship points.

Needing a win to have a shot at the overall at the track owned by his parents, Jeremy Martin seized control of Moto 2 right out of the gate by grabbing the Motosport.com Holeshot Award ahead of Webb and Savatgy. His torrid pace at the start allowed him to move out to a comfortable lead, while Webb settled into second knowing it would earn him the overall win. The lead duo checked out on the field, leaving the battle for third between Savatgy and Musquin. In an effort to minimize the damage done in the point standings, Musquin passed Savatgy on Lap 4 to move into podium position, which he maintained. 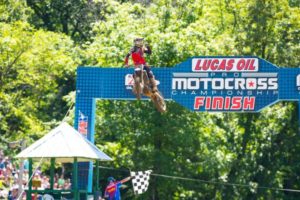 Webb took the overall at Millville with a 1-2 in the 250 class. Pic: Cudby

Martin decimated the field with a wire-to-wire moto win, 25.182 seconds ahead of Webb. Musquin finished third, with Savatgy fourth and GEICO Honda’s Jordon Smith recording a career-best finish in fifth.

Webb’s 1-2 moto finishes edged out Martin’s 3-1 effort, with Webb becoming the first rider other than Martin or Musquin to claim an overall victory this season. It was the second overall victory of his career. Savatgy finished third (2-4), while Musquin’s podium effort in the final moto landed him fourth (8-3).

“The day went really good for me. I just felt solid all day,” said Webb, who missed four rounds earlier this season with an ankle injury. “I didn’t get a great start in the first moto, but I was able to make some passes and pull away once I got into the lead. I got a better start in the second moto, but it was behind Jeremy [Martin] and I know he was motivated [to win]. I knew 1-2 [finishes] would get the job done [for the overall] and since I’m not in the points chase it was important to play it smart.”

“The day started off really good. It’s always nice to be home. They some home is where the heart is and that’s definitely how I feel when I’m here,” said Martin. “The first moto was good, but I missed a shift and that allowed them to gap me. Then a bolt came out of my clutch so I had to learn how to ride without it. It took some time for me to figure it out, but I put in a push on the last lap where we just missed out on second. In the second moto I got the start I needed and was able to just ride my own race and pull away.”

Martin had no clutch in race one but dominated race two going 3-1 for second overall. Pic: Cudby

The Lucas Oil Pro Motocross Championship continues next Saturday, July 25, with the Peterson CAT Washougal National. Washougal MX Park in Washougal, Washington will host the ninth stop of the 12-round championship.