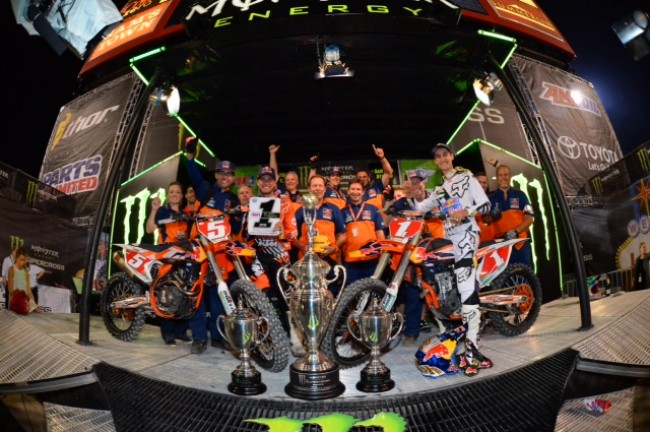 Out front, Dungey and Tomac traded positions on Lap 1, but on Lap 4 Tomac crashed while in pursuit, still able to remount in second place. Peick and Discount Tire Racing/TwoTwo Motorsports’ Chad Reed engaged in a heated battle for third place on Lap 8, but Peick would hold his position and ride to his second podium finish of a year with a third place. Tomac finished second, his 11th podium of the season.

“We [Dungey and Tomac] really pushed the pace out there tonight and went back forth during the early part of the race” said Dungey. “This was a great year; I set a [personal] record for most wins in a season with eight and couldn’t be happier.”

Stewart passed Hampshire on the opening lap for second place. Hampshire held down the number three position until Lap 11, when his teammate Matt Bisceglia passed him and secured the final position on the podium. Stewart earned his best Las Vegas finish in second, besting his fifth-place finishes in 2011 and 2014. Musquin went on to dominate for his first victory in Sam Boyd Stadium in his final 250SX Class race.

“It’s like a dream come true tonight,” said Musquin. “I have never won in Las Vegas before and I used to watch this race back in the day when I was a kid, but tonight it’s my turn. To win my very last supercross race on a 250cc [motorcycle] is awesome.”

Yamalube/Star Racing/Yamaha’s Cooper Webb, who won the Western Regional 250SX Class Championship, missed the Main Event after sustaining an injury during practice. Coming into tonight’s race the Eastern and Western Regions were tied in Dave Coombs Sr. East/West Shootout victories, and Musquin’s win gave the Eastern Region the edge with the region’s 10thwin. Musquin closes out his 2015 campaign with seven victories.

HRT Racing’s Vicki Golden made history this afternoon by becoming the first female in more than four decades of Monster Energy Supercross to qualify for the “Fast 40” – the riders that transition to the night program from timed qualifying – for tonight’s 2015 finale at Sam Boyd Stadium and the 250SX Class’ Dave Coombs Sr. East/West Shootout.